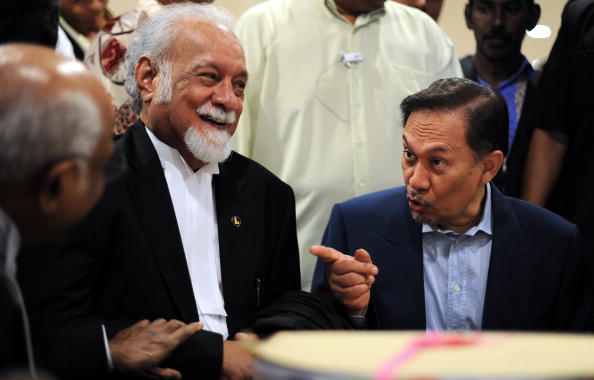 Malaysian opposition leader Anwar Ibrahim (R) discusses with his lawyers Sankaran Nair (L) and Karpal Singh (C) at a cafeteria in Kuala Lumpur on August 9, 2010 during a break on his ongoing sodomy trial. Anwar, a former deputy premier who was sacked and jailed on separate sex and corruption counts a decade ago, is accused of having illicit sexual relations with 25-year-old Mohamad Saiful Bukhari Azlan, who was an aide in his office. AFP PHOTO / Saeed KHAN (Photo credit should read SAEED KHAN/AFP/Getty Images)
Asia & Pacific

Gobind Singh Deo, his son, confirmed that he had died.

“With deep regret I announce the passing of my father YB Karpal Singh,” he wrote on Twitter.

Singh was traveling from Kuala Lumpur to Penang with his son and two others, ABC reported.

“I have just landed at Ankara when I heard the news that YB Karpal Singh died in a road accident . My condolences to the family,” Malaysian PM Mohd Najib Tun Razak wrote on Twitter. “We’ve lost a colleague; an indefatigable fighter for justice; d legendary Karpal Singh! Our sincere condolences to d family. RIP,” wrote Malaysian Opposition Leader Anwar Ibrahim.

According to The Star, Prime Minister Datuk Seri Najib Tun Razak indicated that he got the news of his death.

“I have just landed at Ankara when I heard the news that YB Karpal Singh died in a road accident. My condolences to the family,” he tweeted.