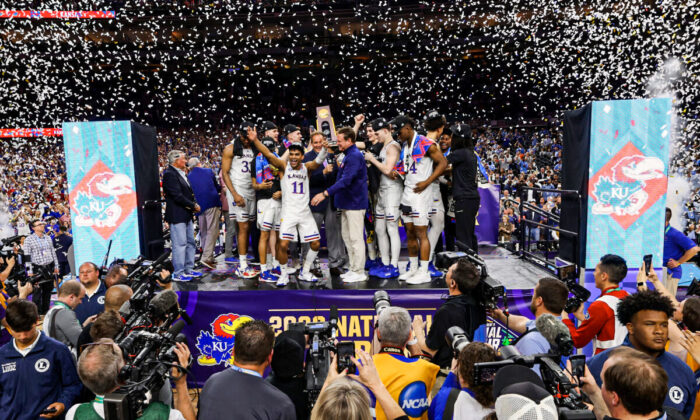 The Kansas Jayhawks (34–6) won their fourth title in the largest comeback in NCAA Basketball Championship history, with a 72–69 win over the North Carolina Tar Heels (29–10) at the Superdome in New Orleans on Monday night.

“I don’t know that we’ve ever had a team flip the script like we have in the NCAA Tournament, whether it be Miami in the Elite Eight or this game,” said Self.

“We just locked in as a family, as a team, and that’s what we do,” said Kansas forward McCormack. “We overcome the odds. We overcome adversity. We’re just built for this.”

Remy Martin came off the bench with 14 points on 5 of 9 shooting, and added three rebounds, an assist, a steal, and a block.

Kansas began the game with a 7–0 run, before Armando Bacot tied the game at 11 on a layup after getting an offensive rebound with 13:30 left in the first half.

The Jayhawks retook the lead 18–14 on a three-pointer by Martin, before the Tar Heels’ Caleb Love tied the game at 18 with 9:21 left in the first.

The game was tied at 22 before Carolina clamped down on defense and held Kansas from the 6:08 mark, to scoring one free-throw and a jumper from Ochai Agbaji at 23 seconds remaining in the first half.

While on offense, the Tar Heels scored 18 points to take a 15-point advantage at the end the half 40–25.

This would lead to the largest comeback in history of 16 points, surpassing the 1963 title game when Loyola overcame a 15-point deficit to beat Cincinnati on a last shot, 60-58.

Bacot suffered a bad ankle sprain two days before in the semi-final game but played through it, dominating the inside, until re-injuring the ankle later, forcing him to leave the game. He led in rebounds with 15, and added two assists, a steal, and a block.

Brady Manek, easily distinguished on the court with his long orange hair and beard, added 13 points on 4 of 8 shooting, and had 13 rebounds, while hitting 3 of 6 three-pointers.

Caleb Love, heroic in the semi-final win over Duke, also scored 13 on 5 of 24 shooting, and added three rebounds, and two assists, and Puff Johnson contributed with 11 points and six rebounds off the bench.

Kansas coach Self made adjustments for the second half, beginning with high pressure defense, and forced their transition to a fast-break style of play. Kansas also had to find a solution for the many missed shots from the inside.

Instead of forcing the ball into McCormack in the first half, Braun was put on the low block and made a couple of early lay-ups, following McCormack’s dunk to start the second half.

Defensively, Kansas began the second half with five defensive stops, forcing two turnovers, before Carolina finally responded with Love’s three pointer to make it a 12-point game, 43-31 at the 17:23 mark.

“When we saw our own blood, we didn’t panic and we came out the second half coming in hot,” said Self. “I was thinking at the 14-minute mark, ‘There’s no way these guys can play for 20 minutes defense like this,’ but they did.”

Kansas continued their tenacious defense to tie the game at 50, after Agbaji’s traditional three point play.

Martin’s layup with 4:13 remaining would give Kansas their biggest lead in the second half at 65–61.

Carolina would come back on top with kMane’s tip-in for a one point edge 69–68 with 1:41 left in the game; that would be the Tar Heels last basket.

McCormack closed out the game with two jumpers at 1:21 and 0:22 left in the game for a final score of 72–69, as Carolina missed two three-point attempts by Johnson and Love in the final six seconds.

“When we had to have a basket, we went to Big Dave, and he delivered,” said Self.

This year’s Carolina team was not assured a spot in the “Big Dance,” but peaked in the tournament to finish second.

“I can’t remember a time in my life where I should be disappointed,” said rookie Tar Heels coach Hubert Davis, attempting to lead a team to a championship in his first full season as head coach. “But I am filled with so much pride.”