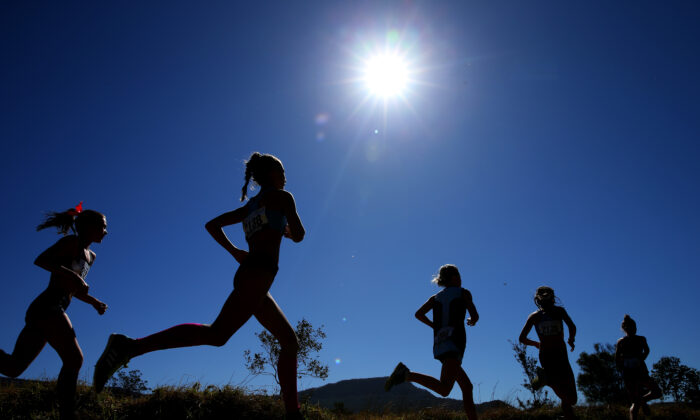 Competitors race in the Girls 13 years 3k U14 event during the Australian Cross-Country Championships at Kembla Grange in Wollongong, Australia, on Aug. 24, 2019. (Jason McCawley/Getty Images)
US News

Kansas Governor Laura Kelly on April 15 vetoed the Fairness in Women’s Sports Act, a bill introduced by Republicans in February 2021 that would bar transgender athletes from competing in girls’ school sports across the state.

“We all want a fair and safe place for our kids to play and compete,” Kelly stated in a statement obtained by Fox4.

However, she added that the bill “came from politicians trying to score political points” and would be “harmful to students and their families” as well as businesses.

“This bill would also undoubtedly harm our ability to attract and retain businesses. It would send a signal to prospective companies that Kansas is more focused on unnecessary and divisive legislation than strategic, pro-growth lawmaking,” Kelly stated.

Bill SB160 requires athletic teams and clubs sponsored by public elementary, secondary, and post-secondary schools to ban male students from joining teams or sports “designated for females.” It does not stop female athletes or girls from participating in men’s or boys’ sports.

Following Utah, Kentucky, and Indiana, Kelly was the fourth state governor to shoot down a bill banning those who were born as men and now identify as women from participating in women’s sports.

Republican sponsors of the bill said it was needed to protect the integrity of female sports and opportunities for girls to gain college athletic scholarships.

“Men should not be competing in women’s sports,” Kansas Attorney General Derek Schmidt stated after the veto. “Governor Kelly today vetoed (for the second time) a bill to implement that commonsense principle. I would have signed the bill into law.”

Senate President Ty Masterson said that the bill is “about protecting the women who worked and trained all her life” who “should not have her hard work wiped out by being forced to compete on unlevel playing fields,” according to a statement obtained by Fox News.

At least fifteen states have enacted similar bills on transgender athletes. Meanwhile, lawsuits against such bills are currently pending in Tennessee and Florida.

Kansas lawmakers can override the governor’s veto with simple majorities in both the House and Senate. A veto override vote could happen as soon as April 25 when session resumes.