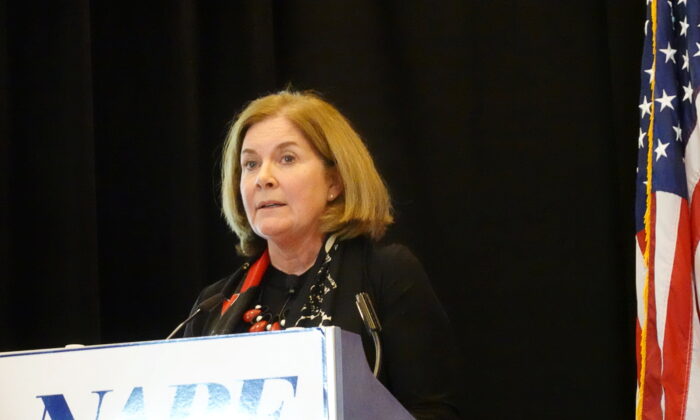 WASHINGTON—Abrupt changes to the federal funds rate could stress the economy and financial markets, with steady and well-communicated increases preferable given the uncertainty about how hard and fast rate hikes will hit business and household spending, Kansas City Fed president Esther George said on Monday.

With inflation running at a 40-year high, “the case for continuing to remove policy accommodation is clear-cut,” George said in remarks prepared for delivery to a labor-management conference in Missouri.

But “the speed at which interest rates should rise … is an open question,” she said in remarks made as several of her colleagues have already endorsed a second consecutive three-quarter point increase at the upcoming July Fed meeting. George dissented against an increase of that size in June, preferring the half-point increase the public was expecting until the weekend before the meeting.

“The pace at which this path unfolds will need to be carefully balanced against the state of the economy and financial markets,” George said in what amounts to the bluntest warning yet from a policymaker that the central bank may be at risk of overdoing it.

The Fed since March has been raising interest rates to try to curb inflation, and in the space of three meetings has moved in quarter point then half point then three-quarter point increments. This has ignited a rapid shift in financial conditions seen in higher home mortgage rates and a reordering of bond and stock financial markets.

“This is already a historically swift pace of rate increases for households and businesses to adapt to, and more abrupt changes in interest rates could create strains, either in the economy or financial markets,” said George.

“Communicating the path for interest rates is likely far more consequential than the speed with which we get there,” George said, hinting she may be inclined against another three-quarter point hike when the Fed meets in July.

Financial markets currently expect that larger increase. But many investors and economists also have been flagging a heightened risk the central bank may raise interest rates so high it triggers a recession.

George said she found it “remarkable” a recession debate had emerged “just four months” after the Fed started raising rates, with some analysts even forecasting the Fed will need to begin cutting the federal funds rate next year, presumably because of an economic slowdown.

The annual consumer prices jumped 9.1 percent in June, the largest increase in more than four decades. The inflation data, reported by the Labor Department on Wednesday, followed stronger-than-expected job growth in June and suggested that the Fed’s aggressive monetary policy stance had made little progress thus far in cooling demand and bringing inflation down to its 2 percent target. With rents surging by the most in 36 years, inflation could become entrenched.

In a survey released Monday the New York Fed said that consumer expectations for inflation over the next year hit a series high 6.8 percent.

Yet over a 3-year period household inflation expectations fell in the latest survey from 3.9 percent to 3.6 percent—still well above the Fed’s 2 percent target, but moving in the right direction.

Recent economic data has also shown consumption spending falling on an inflation-adjusted basis, and the outsized wage gains of the pandemic era beginning to moderate.

Overall economic growth may end up being negative for the April through June period, just as it was for the first three months of the year, a possibility that may add to recession warnings.