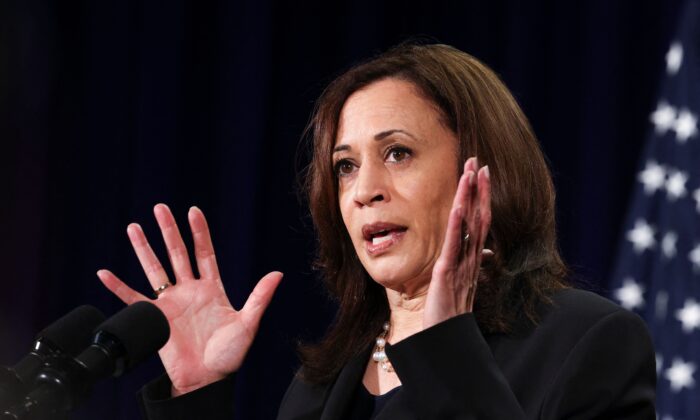 “Ashley is a valued member of the vice president’s team, who has worked tirelessly to advance the goals of this administration,” the official told CNN. “She is leaving the office in December to pursue other opportunities.”

It is understood that the official also confirmed the news to The Independent.

Etienne has not yet commented on her alleged exit but it is not unusual for White House staffers to leave after 12 months.

The communications director, 43, was formerly a senior advisor to the Biden presidential campaign and current House Speaker Nancy Pelosi (D-Calif.) when she was minority leader. She also worked as special assistant to then-President Barack Obama.

Prior to her start in politics, she obtained her Master’s degree in political communications at Johns Hopkins University, according to her LinkedIn profile.

Vanity Fair was first to report Etienne’s departure, which is described as coming after “a raft of stories on infighting and low morale in the vice president’s office” this week.

CNN last week reported growing tensions in the West Wing as a number of Harris staff members feel that she is not being “adequately prepared or positioned, and instead is being sidelined.”

The Epoch Times has been unable to verify such reports.

The alleged exit also comes just days after Harris saw her approval ratings drop to 28 percent, 10 percent below that of President Joe Biden’s, as per a Suffolk/USA Today poll. The same poll showed that 51 percent of Americans disapprove of the job Harris is doing while 21 percent are undecided.

Harris faced criticism for failing to visit the U.S.-Mexico border earlier this year at a time when illegal immigration surged to unprecedented levels. She later visited a Border Patrol station in El Paso, Texas, and told reporters, “It’s not my first trip, I’ve been to the border many times,” referring to trips she made to the border when she was a California lawmaker.

The vice president has also been noticeably absent from the spotlight since taking up her role nearly 11 months ago, adding further speculation that she is being sidelined.

But speaking to ABC’s George Stephanopoulos on Thursday, Harris defended her job performance while also attempting to quash rumors of fraught tensions in the administration.

“We have convened members of Congress, we have convened people around our nation, asking, ‘what do you want?’ And this is a response to what they want. And it’s actually going to hit the ground in a way that is going to have direct impact on the American people. We’re getting things done, and we’re doing it together.”

The vice president also denied that she feels “misused or underused” in her role and insisted she is, “very, very excited about the work that we have accomplished. But I am also absolutely, absolutely clear-eyed that there is a lot more to do, and we’re gonna get it done.”

Meanwhile, the White House has also dismissed reports of rising tensions this week, calling Harris a “key partner” and a “bold leader.”

“The president selected the vice president because—to serve as his running mate—because he felt she was exactly the person he wanted to have by his side to govern the country,” White House press secretary Jen Psaki told reporters at a White House briefing on Monday.

“She is a key partner, she’s a bold leader, and she is somebody who has taken on incredibly important assignments, whether it is addressing the root causes of migration at the Northern Triangle or taking on a core cause of democracy in voting rights,” Psaki continued.

“There’s been a lot of reports out there and they don’t reflect his view or our experience with the vice president,” she added.