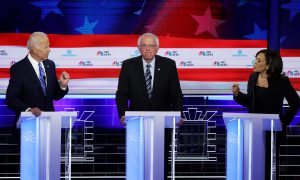 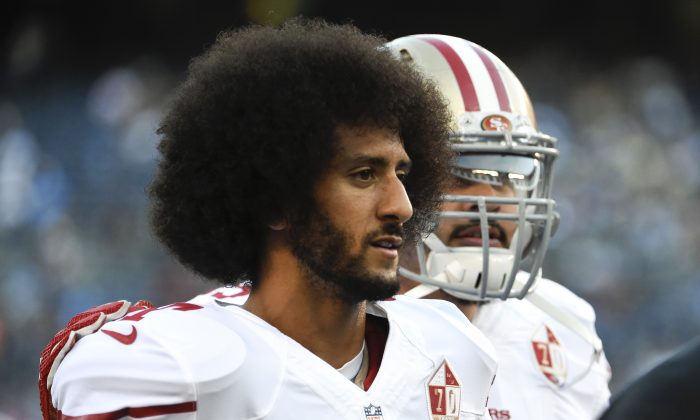 Sen. Kamala Harris (D-Calif.) said that “many smart people” have said that Russia was behind the controversy surrounding former NFL quarterback Colin Kaepernick and his national anthem protests.

Harris was speaking during an appearance on “The Breakfast Club” on July 12.

Harris brought up the Kaepernick situation, claiming that Russian bots may have started the controversy.

“You know, people have said… remember the whole—the heat that ended up around the bend the knee and Colin Kaepernick,” she started.

.@KamalaHarris tells @breakfastclubam that it was actually Russia that started the controversy over Kaepernick kneeling during the anthem. pic.twitter.com/zlFP7qsyzy

“Many smart people have said it actually was not a thing. The Russian bots started taking that on,” she added.

Kaepernick began kneeling before games in 2016 while the national anthem was played.

He said that he started doing so as a form of protest against alleged racially fueled brutality by police against minorities.

“I am not going to stand up to show pride in a flag for a country that oppresses black people and people of color,” Kaepernick told NFL Media. “To me, this is bigger than football and it would be selfish on my part to look the other way. There are bodies in the street and people getting paid leave and getting away with murder.”

Harris has seen big gains in the polls recently along with Sen. Elizabeth Warren (D-Mass.)

According to an average of polls on the RealClearPolitics website, Harris has climbed to 15 percent, just behind Warren and Sen. Bernie Sanders (I-Vt.), who are both at 15.2 percent.

Former Vice President Joe Biden (26.8 percent) is still the frontrunner but his support has declined significantly in recent months.

After her Kaepernick comments, Harris was asked whether she thinks her 2020 presidential campaign could someday be targeted by Russian bots.

“We already know we are,” she responded. “What we have to do is we also have to know when we’re being played and we also have to respond immediately when we know something is inaccurate. Because in 2016 I think it’s fair to say a lot of folks thought ‘oh nobody’s gonna take that seriously, that won’t get any heat.'”

Harris may have been referring to a research group that claimed to find Russia-linked Twitter accounts had sent more than 12,000 tweets about the NFL or the anthem in September 2017 after President Donald Trump called out the NFL over the ongoing anthem protests.

“Tweets about the NFL and the national anthem surged from accounts linked to the Internet Research Agency, the Russian and Kremlin-backed company accused of attempting to sow discord in the U.S.,” reported The Wall Street Journal in October 2018.

At one point, 24 accounts sent out a video about Trump “shredding” NFL anthem protesters around the same time.

The Journal cited Clemson University researchers in the article.

“They clearly are using it as a wedge issue,” Darren Linvill, an associate professor of communication at Clemson, said. “It’s like we handed them a loaded gun.”

He and another professor found the tweets sent by accounts shut down by Twitter after Congress labeled them linked to the Russian group.

While the effort may have boosted different talking points temporarily, the impact of the tweets is doubtful, since only 22 percent of adults in the United States use Twitter, making it one of the least-used social media platforms. For comparison, 69 percent use Facebook and 37 percent use Instagram.

The anthem issue proved controversial for years before mostly dying out in the 2018-19 season.

A CBS poll this year found that 50 percent of respondents said the NFL should require players to stand during the anthem while others said players should be able to stand or kneel.