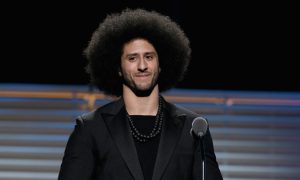 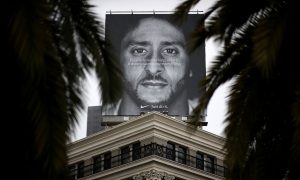 Nike has pulled a patriotic sneaker made to celebrate Independence Day because Colin Kaepernick reportedly complained that it features an older version of the American flag which he says is “offensive.”

According to the Wall Street Journal, former NFL player Kaepernick complained that the Betsy Ross flag, which features 13 stars in a circle, was created in a period of American history when slavery was widespread.

The cancellation of the shoe—like Kaepernick’s refusal to stand for the national anthem—sparked outrage from many social media users.

The Governor of Arizona announced he was withdrawing state incentives for a Nike factory, saying the company had “bowed to the current onslaught of political correctness and historical revisionism.”

The flag features only 13 stars, which stood for the 13 colonies of the time.

“Nike has chosen not to release the Air Max 1 Quick Strike Fourth of July as it featured the old version of the American flag,” a spokeswoman for the company said, according to Market Watch.

Citing sources familiar with the matter, the Wall Street Journal said that Kaepernick “told the company it shouldn’t sell a shoe with a symbol that he and others consider offensive.”

According to the WSJ, Kaepernick declined to comment for the story.

Kaepernick, a former NFL player who stirred controversy in 2016 by kneeling during a pre-match national anthem, teamed up with Nike last year to become the face of a new campaign that harnessed his credentials as a protester, rather than a sportsman.

The new ad marked the 30th anniversary of Nike’s “Just Do It” slogan and said: “Believe in something. Even if it means sacrificing everything,” featuring a closeup of Kaepernick’s face.

Kaepernick, a former quarterback for the San Francisco 49ers, started kneeling during the national anthem as it played before games in 2016. He said it was a protest against what he perceived as police mistreating minority communities. He also blamed racism. Some other players have followed suit.

On May 23, the league banned players from taking a knee during the anthem but allowed them to go to the locker room while it plays.

On July 20, the NFL shelved the policy while negotiating with the players’ union, the National Football League Players Association (NFLPA), which filed a grievance against the anthem policy on July 10.

Kaepernick’s actions proved controversial, and certainly helped propel Nike’s name into the headlines. But many Americans said they would boycott the NFL and Nike because they felt that they were failing to respect the national symbol.

Many people took to social media to post videos of themselves burning NFL products and beloved Nike sneakers.

The cancellation of the Fourth of July sneaker prompted a similar response from some people.

“I’m so tired of this!” wrote one person on Facebook. “I’ve worn Nike all my life. I don’t own any other brand of shoe. But now I will be looking to support a different company with my dollars!”

Another wrote, “Hey Nike, what about the rest of the US that didn’t think it was offensive, you have lost my business.”

Harking back to the time of the American Revolution, the Betsy Ross is sometimes used to evoke a more historically-rooted sense of patriotism, or as a reminder of traditions.

It has sometimes been used by traditionalist movements such as the Tea Party.

Some people have claimed that the Betsy Ross flag has been adopted by “extremists.”

However, a brief search through extremist organizations’ flags suggests that the Betsy Ross has not been officially adopted by any group espousing white nationalism or other extremist views.

What else is open on Fourth of July?

An altered version of the flag has been adopted by the Three Percenters, an American group that built itself around the protection of constitutional rights, notably gun rights, as a bulwark against a tyrannical collectivist government.

Their flag features a III in the center of the 13 stars. The three percent refers to the idea that only 3 percent of American colonists took up arms against the British.

A man who was convicted over the shooting incident that injured five people reportedly had associations with the Three Percent movement, although an explicit connection or motivation does not seem to have been established.

The official Three Percent website says that they are not a militia group, and are not anti-government. “We are very pro-government, so long as the government abides by the Constitution, doesn’t overstep its bounds, and remains ‘for the people and by the people.’ Our goal is to utilize the failsafes put in place by our founders to rein in an overreaching government and push back against tyranny.”