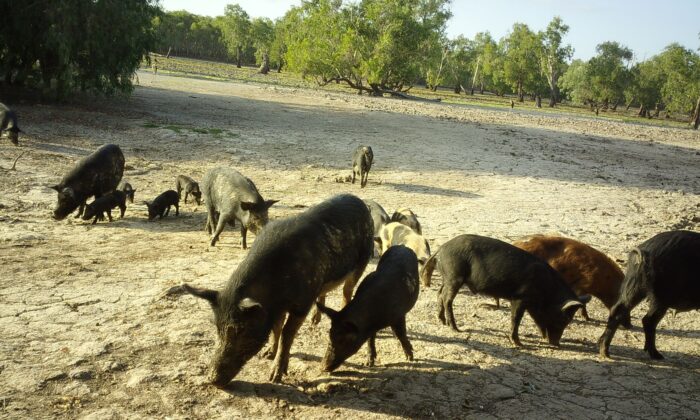 The most effective method of controlling feral pig numbers in Australia’s top end has not been used since 2019 due to a culling accident that seriously injured two park rangers.

Large feral animals such as pigs and buffalo cause significant damage to wetlands across northern Australia, as they are a potential transmitter of diseases.

“Removing 6,000 feral pigs from the park also contributes to efforts at reducing the risk of Japanese encephalitis which has been detected in the feral pig population in the Northern Territory (NT),” Barclay told the Epoch Times.

“Pigs are also susceptible to foot-and-mouth disease, so reducing the feral population will be important in the event of any disease outbreak in Australia.”

Aerial culling—the shooting of animals from helicopters—can be a humane and low-cost method of keeping feral pig numbers under control.

Trapping, poisoning, and ground shooting have had some success but aerial shooting is the quickest.

Feral pigs came from Europe and Asia after being collected on the way to Australia, according to the NT government. Their numbers peak during periods where there is abundant green vegetation, especially following heavy rain or flooding.

“In addition to pigs and buffalo, horses, feral cattle, donkeys and cats are also prevalent in the park,” Barclay said.

“At the request of traditional owners, we focused our aerial shooting activities on feral pigs, because they were considered the highest priority due to the damage they do to floodplains and waterways, but we also removed some buffalo and feral cats.”

Three years ago, two park rangers were seriously injured when their helicopter crashed in a feral pig and buffalo cull.

The cause was linked to Parks Australia’s safety procedures, including a shooter’s harness that was three weeks past its retirement date, and a risk assessment that was three years out of date.

Aerial culls were suspended until adequate safety protocols were in place.

The last time that as many feral animals were removed was around five years ago, Barclay said.

“More than 6,000 feral animals were removed from the park during a 24-day operation that focused on areas with high concentrations of horses and buffalo,” he said.