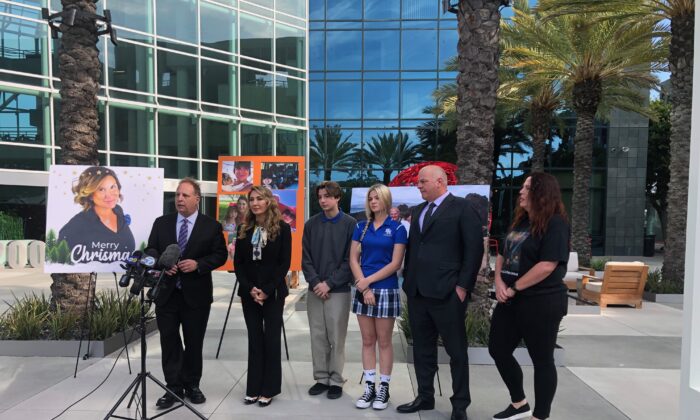 Attorney Eric Dubin (L) and Attorney Anne Della Donna (2nd L), stand with the family and a friend of Nerissa Regnier, who died of COVID-19, during a press conference in Irvine, Calif., on Jan. 26, 2022. (Brandon Drey/The Epoch Times)
Southern California

IRVINE, Calif.—The family of Nerissa Regnier, a mother of three, announced on Jan. 26 at a press conference that they planned to sue Kaiser Permanente for causing wrongful death after refusing her the COVID-19 vaccine and monoclonal antibody treatment.

Regnier, of Mission Viejo, had been suffering from multiple sclerosis before she was tested positive for COVID-19 last August and died from the disease at the age of 45 in December 2021.

“She desperately wanted the COVID-19 vaccine, and Kaiser said no—not once, not twice, but seven times—you are not eligible,” Annee Della Donna, the family’s attorney, told reporters during the press conference.

Della Donna said Regnier was told the vaccine contained a “live virus” and could put her at severe risk of catching the disease.

“It didn’t make any sense,” Della Donna said. “The COVID-19 vaccine does not have a live virus and should be given to every patient who is immunocompromised.”

Kaiser Permanente officials, while declining to comment on the circumstances of Regnier’s death, insisted they are committed to providing the best care available to all patients. They also rejected allegations that Regnier was told she could not have a COVID-19 vaccine because it contained a “live virus.”

The Centers for Disease Control and Prevention stated on its website that everyone over five years old, especially immunocompromised individuals, should get vaccinated as soon as possible.

For months, Regnier pleaded with her doctors to get inoculated after starting a new medication regimen for her multiple sclerosis last February.

Last August, she contacted her neurologist, who told her to get vaccinated.

She rushed over to the Sand Canyon Kaiser Permanente facility two days later to get the jab while feeling COVID-19 symptoms, only to test positive.

“And then what happens is disastrous,” Della Donna said.

Instead of giving Regnier monoclonal antibodies, Kaiser refused to admit her into the hospital and gave her antibiotics and steroids.

After failing to get admitted by Kaiser, her husband transferred her to Hoag Memorial Hospital Presbyterian, where she was told it was too late for her to get the treatment, according to Eric Dubin, the family’s second attorney.

Regnier fought for her life for nearly 100 days as her family watched and waited for her to return home.

“She never let us see how sick she was,” Regnier’s 16-year-old daughter, Isabelle, told reporters. “She always said, ‘Don’t worry, I’ll be home for Christmas,’ or ‘I’m coming home next week.’”

Regnier was later transported back to Kaiser, where she eventually died.

“She trusted her doctors to death, but they were dead wrong,” Dubin said.

Family and friends described Regnier as the life of the party who loved spending time with them going out for dinner, snowboarding, and making everyone laugh.

“If they had just treated her as if her life mattered, she would not have died,” Della Donna said. “We believe based upon this case Kaiser has refused to give the COVID vaccine to hundreds of their immunocompromised patients.

Kaiser Permanente issued a statement saying it had not been served with a lawsuit and added, “We are investigating these allegations, but we are not able to comment due to privacy considerations.”

Correction: A previous version of this article did not include the official statement issued by Kaiser Permanente. The Epoch Times regrets the error.