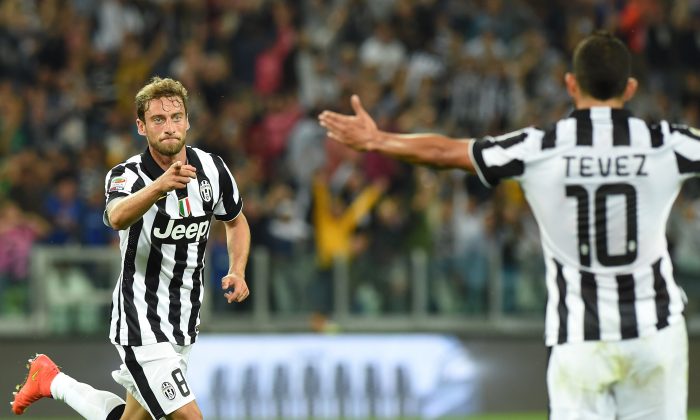 Claudio Marchisio (R) of Juventus FC celebrates a goal during the Serie A match between Juventus FC and Udinese Calcio at Juventus Arena on September 13, 2014 in Turin, Italy. (Photo by Valerio Pennicino/Getty Images)
Soccer

Juventus and Malmo FF are set to play in a UEFA Champions League match on Tuesday, September 16.

The game will be broadcast on SKY Go Italia in Italy, as well as TV6 Sweden in Sweden.

The game will also air on Sky Sports Red Button and Sky Go in the United Kingdom, as well as ESPN3 and ESPN Deportes+ in the United States.

Juventus are 1/6 to win the match, as compared to 22/1 for Malmo FF, according to OddsChecker.

See an AP preview of the match.

MILAN (AP) — Juventus is back in the Champions League after an early exit in last year’s competition, and Atletico Madrid is back after nearly winning it all.

Juventus will face Swedish club Malmo in Group A on Tuesday. Atletico, which lost to Real Madrid in extra time in last year’s final but won the Spanish league, will face Olympiakos.

Here are some things to know ahead of Tuesday’s games:

Suspended Atletico Madrid coach Diego Simeone won’t be pacing the sidelines spouting orders and inspiring his team. But his spirit has so far been more than aptly embodied in assistant German Burgos.

Simeone will miss Atletico’s Champions League opener while serving a one-match ban for receiving a red card in the closing moments of his team’s 4-1 loss to Real Madrid in last season’s final. Simeone was booked for going onto the field to confront Madrid defender Raphael Varane for what he considered the player’s taunting of his bench.

Fortunately for Atletico, the team has grown accustomed to winning without Simeone on the touchline.

Atletico has won two of three Spanish league matches with Burgos handling the in-game coaching duties while Simeone looks on from the stands, including a 2-1 victory at crosstown Madrid last weekend.

It might be almost sacrilege to say so, but there are hints that life at Juventus is even better under coach Massimiliano Allegri.

Juventus fans were left reeling when Antonio Conte quit shortly after leading the team to a third straight Serie A title. Matters were made worse when he was replaced by Allegri, who is a former AC Milan coach and the antithesis of Conte in style, personality and background.

However, little has changed and Juventus opened the domestic season with two comfortable wins.

“Before we played a very precise game,” said Juventus midfielder Claudio Marchisio, who scored in Saturday’s 2-0 win over Udinese. “Every movement was practically programmed and we continued on our path even in more difficult periods. High intensity, always. With Allegri we keep the ball more and try to see when it is better to save our energy with possession. It’s a bit like tiki-taka.

“We’re doing well, the new signings have fitted right in and our approach in these first two games has been prefect. We couldn’t have started better. Are we stronger than last season? You weigh up things at the end of the year. But there seems to be noticeable improvement.”

Massimiliano Allegri was often beset with injuries to his squad during his time at AC Milan, and in that sense things have not improved much at Juventus.

Midfielders Andrea Pirlo and Arturo Vidal are nearing fitness but are unlikely to be risked against Malmo, with an important league match coming up at Milan next weekend.

Defender Andrea Barzagli will also miss out but Giorgio Chiellini is expected to replace Angelo Ogbonna in defense after recovering from a left calf injury, while new signing Alvaro Morata should see more action.

The Spanish striker, who had been sidelined after getting injured in his first Juventus training session, was handed his debut in the 89th minute against Udinese on Saturday and went very close to scoring.

“I was close to getting off the mark but it’s only the first game,” Morata said. “The important thing is that the team won.”

Olympiakos’ hopes of upsetting Atletico Madrid rely heavily on a talented Spaniard, who forged his career at the Vincente Calderon Stadium.

Robert, a 28-year-old goalkeeper, will be at the heart of coach Michel Gonzalez’s defensive line on Tuesday after his standout performances for the Greek champions in Europe last year.

Roberto rose through Atletico’s ranks as a young player but spent most of his senior career on the bench at his home town club in Madrid, who signed off on his Greek loan last year.

“I’d like to see him in the Spanish national team,” Gonzalez said of the goalkeeper in a weekend interview. “He’s tactically smart … It’s hard to believe that no other club expressed interest in him over the summer.”

Gonzalez is expected to field a cautious 4-4-1-1 lineup with Kostas Mitroglou, brought back on loan from Fulham, as the loan striker.

The Greeks head into Tuesday’s match off a 3-0 win over OFI in the domestic league, but might still be missing captain Giannis Maniatis, who is struggling to return from injury.

Malmo traveled to Turin on Monday for the club’s first Champions League match.

The Swedish team lost the 1979 European Cup final to Nottingham Forest 1-0, but this is the first time it has qualified for Europe’s top club competition since it changed its name to the Champions League in the 1990s.

Center back Erik Johansson has recovered from a stomach problem and is expected to play against Juventus. Winger Emil Forsberg is also likely to be in the lineup despite walking out of a Swedish league game Saturday with a hip injury.

Malmo is expected to field a defensive formation against heavily favored Juventus, with captain Markus Rosenberg as a lone striker.