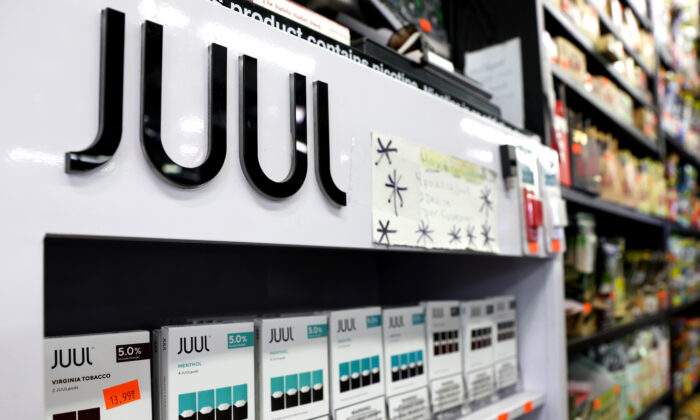 Packages of Juul e-cigarettes are displayed for sale in the Brazil Outlet shop in Los Angeles, Calif., on June 22, 2022. (Mario Tama/Getty Images)
Companies

Electronic-cigarette maker Juul has filed a lawsuit against the Food and Drug Administration (FDA) after the agency earlier this year ordered the company to remove its products from stores in the United States.

The lawsuit (pdf) was filed on Sept. 20 in a court in Washington, D.C., over the agency’s refusal to hand over supporting documents to Juul pertaining to the FDA’s reasoning behind the ban.

Washington, D.C.-based Juul was ordered back in June to remove its e-cigarettes off the shelves in the U.S. market after the FDA said the company’s application “lacked sufficient evidence” regarding the toxicology levels of the products.

“The agency invoked one of the most widely abused exemptions—the deliberative process privilege—to withhold the majority of those materials,” lawyers for the company wrote.

Attorneys for Juul argue that the documents are “central to understanding the basis for FDA’s marketing denial order” and whether or not the FDA “balanced the public health benefits and risks of JLI’s products as the Family Smoking Prevention and Tobacco Control Act (“Tobacco Control Act” or ‘TCA’) requires, and whether FDA’s reasoning is scientifically sound.”

“Withholding the disciplinary reviews that would answer these questions impedes JLI’s ability to seek appropriate relief from [the] FDA’s decision and is also completely at odds with the purpose of the FOIA and the transparency Congress expects from administrative agencies,” the complaint alleges.

The company accused the FDA of violating the Freedom of Information Act, and asked that the court to “assume jurisdiction in this matter and maintain jurisdiction until the FDA complies with FOIA and every order of this court.”

They also asked that the court to prevent the FDA from continuing to withhold the records, and order the FDA to disclose all responsive records, including those it claims are exempt from disclosure.

Lawyers also asked that the court declare the FDA’s failure to disclose the records in violation of the Privacy Act, which states that any individual has a right to access federal agency records in which they are the subject.

“Given the FDA’s actions to publicize its decision, it should not be permitted to hide its supporting work in the shadows,” lawyers for the company wrote in the lawsuit.

“The public deserves a complete picture of the scientific facts behind one of the agency’s most controversial and closely scrutinized decisions in recent years, especially where even the FDA recognizes its order is suspect,” lawyers wrote.

Back in June, the FDA said that it has “dedicated significant resources” to products from those companies that account for the majority of the U.S. market and that the agency recognizes that those products “have played a disproportionate role in the rise in youth vaping.”

In Tuesday’s lawsuit, Juul said it submitted premarket tobacco product applications (PMTAs) to the FDA for its e-cigarette products as well as a new device with age-verification technology in July 2020.

Juul said the PMTAs included “over 125,000 pages of data, information, and analysis from over 110 scientific studies to support the marketing of JUUL products.”

The company said the PMTAs aimed to show the FDA that following a “holistic analysis across multiple scientific disciplines,” its products would “reduce harm from tobacco use and that marketing them would be appropriate for the protection of public health.”

A spokesperson for the company told Axios in a statement on Tuesday: “We took this necessary action as we remain concerned about the inequitable treatment of our applications given the political pressure on the agency to reach a specific result.”

“This action will help us obtain information about the FDA review of our applications relevant to our continued appeal of the agency’s decision,” the spokesperson added.

Earlier this month, Juul agreed to a $440 million settlement following a two-year investigation by 33 states into the marketing of its high-nicotine vaping products. The settlement comes amid a surge in teen vaping across the nation.

An FDA spokesperson told The Epoch Times by email: “The FDA declines to comment on possible, pending, or ongoing litigation.”