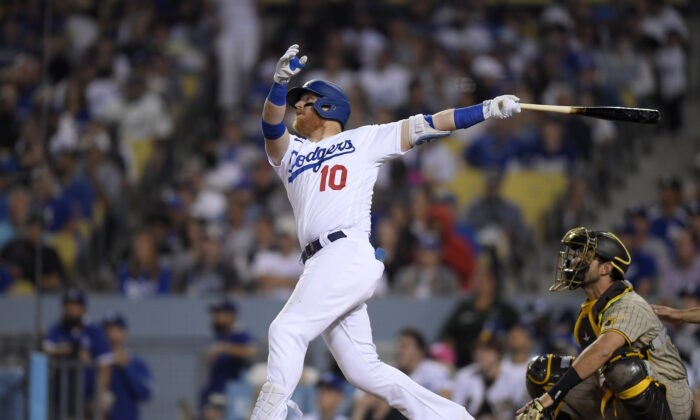 Justin Turner provided the Los Angeles Dodgers (47–28) all the offense needed, with two homers to defeat Interstate-5 neighbor San Diego Padres (46–32) by 3–1 and maintain a 2.5 game lead in the National League West over the Padres.

“Been feeling like I’ve been pretty close to breaking out,” said the 37–year old LA native Turner.

It was Turner’s 13th career multi-homer game, but just the first since May 18, and his last two home-run game came in September of last year.

“I haven’t felt great, but you still show up every day and try to help the team,” added Turner. “Eventually, you feel like it’s going to click.”

“That’s as good of a swing as I’ve seen him take this year, going to the big part of the field, late at night, and for a home run,” said Dodgers manager Dave Roberts of Turner’s second homer. “He’s been trending in the right direction for quite some time, in my opinion.”

Turner found success coming to the Dodgers in 2014, batting .340, and became one of the team’s best hitters helping the club win seven straight division titles, three pennants, and the 2020 World Series.

Turner was born in Long Beach, and attended nearby at Mayfair High School in Lakewood, Calif., where he earned league MVP, hitting .514 as a senior and three-time All-Suburban first-team honors.

He majored in kinesiology at Cal State Fullerton and received All-American honors from “Baseball America” at second base in 2003.

Turner passed on his MLB 29th round draft pick in 2005 by the Yankees, and waited the following year to sign with the Cincinnati Reds as the 204th pick in the seventh round—and would eventually play for the Orioles and the Mets before coming to LA.

The Los Angeles City Council declared Jan. 22, 2019, “Justin Turner Day” in honor of Turner’s philanthropic contributions; The foundation is an official charity for the LA Marathon while hosting an annual charity golf tournament and partners with Paralyzed Veterans of America, 17Strong, and the Dream Center.

The Padres took an early one-run lead in the first inning from Nomar Mazara’s single that drove in Manny Machado following his double.

In the second, the Padres threatened with the bases-loaded, but Jurickson Profar lined out to right as Dodgers Chris Taylor made a double play from the outfield with the catch, and threw out Trent Grisham at home to end the inning.

“That was really the play of the game,” said Turner. “Big momentum swing for us and keeping it a one-run game. That was huge.”

Taylor was playing right field replacing Mookie Betts, who is out with a broken rib.

“You miss Mookie a lot, but I don’t know if Mookie could have done a better job,” said Roberts.

In the offseason, Taylor underwent surgery to remove bone chips from his right elbow stating, “I’m definitely feeling stronger as the year progresses.”

“Apparently he (Taylor) just has a knack for throwing Grisham out at the plate,” added Turner. “Have seen him do it a few times now. Big momentum swing for us and keeping it a one-run game, that was huge.”

Turner would hit his first home run off of National League Cy Young Award candidate Joe Musgrove, 383 feet to center field, in the second inning to tie the game.

Then followed with the game-winner to right center field of 404 feet, with Max Muncy on first from a walk, in the bottom of the seventh inning for the 3–1 victory.

Dodgers starter Mitch White pitched 4 2/3 innings, allowing one run; he’s in the rotation due to injuries to Walker Buehler and Andrew Heaney.