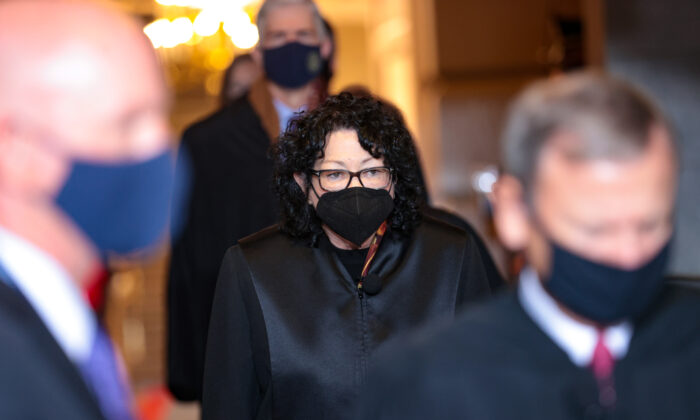 Justice Sotomayor Says No ‘Clear Answer’ in Most Court Cases

Most laws are written generally and many cases that reach the Supreme Court don’t have a clear-cut answer, Justice Sonia Sotomayor said in rare television appearances on Tuesday.

“The biggest misperception that people have is that the law is clear. Most people think of the law as black and white, that there’s an answer. But the reality is, there often isn’t a clear answer. Most of the time when the Supreme Court takes cases, it’s because the courts below have been disagreeing about the answer,” Sotomayor, an Obama nominee, said on “Live With Kelly and Ryan.”

Sotomayor said the reason is that laws are generally written broadly, “understanding that human nature is such that different situations are going to come up.”

By the time a case reaches the nation’s top court, lower courts have often split on them, because of the complexity of the cases.

“And that can be unsatisfying to people. They don’t understand why the judges are disagreeing. They don’t understand why it’s so hard,” Sotomayor said. “But it’s why we have courts: to ensure that people who are trained in the law, who can not be judgmental but who can and hope to be open-minded and fair, can give their best answer on what the law means. And so that, I think—I hope—will give people some solace when they feel the courts made a wrong decision. Understanding that the answers are not as easy to come to as they may want.”

On NBC’s “Today” show, the 67-year-old New York native said that justices are aware and worried that, according to polls, the credibility of the court has dropped in recent years.

“We think about ways in which we can comport ourselves … to ensure that the public has confidence in what we’re doing,” she said.

Sotomayor said one of the most difficult aspects of being on the court “is that there are no easy answers,” adding that, “reasonable people can disagree” and reiterating that in many cases, lower courts have split on decisions in each case.

“Because of that, obviously, just as the larger society disagrees about the answers to some of our problems, so does the court, and if you bear that in mind, perhaps the public can be more accepting of the kind of work we do,” Sotomayor said.

The justice, who was promoting her fourth children’s book in the virtual appearances, was not asked about the misinformation she offered during oral arguments earlier in January.

Sotomayor created a stir when, questioning lawyers attempting to overturn a Biden administration vaccine mandate, she claimed that “we have over 100,000 children, which we’ve never had before, in serious condition, many on ventilators.”

Federal data at the time showed just 3,342 children 17 or younger in hospitals with COVID-19.

Sotomayor did say Tuesday she wished she could travel to New York to do interviews.

“But this is a little bit safer for all of us,” she said.