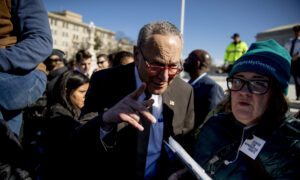 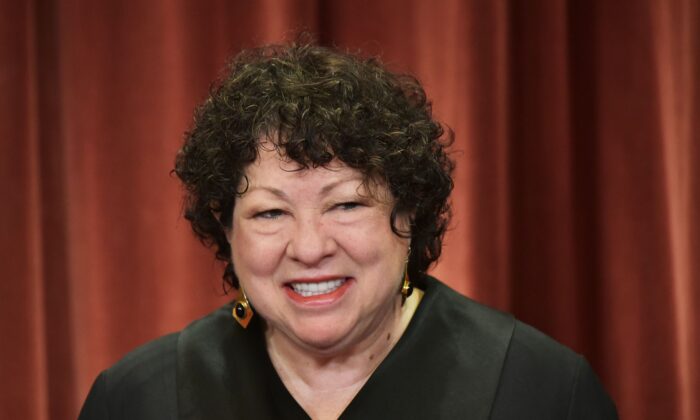 Associate Justice Sonia Sotomayor poses in the official group photo at the U.S. Supreme Court in Washington on Nov. 30, 2018. (Mandel Ngan/AFP via Getty Images)
US News

Justice Sotomayor Recuses Herself From Case on Electoral College Electors

Justice Sonia Sotomayor has recused herself from one of the “faithless electors” cases pending before the Supreme Court because of her friendship with one of the parties involved in the lawsuit.

The clerk of the court informed the parties in a letter on Tuesday that Sotomayor would not participate in the case that will decide the enforceability of Colorado laws that threaten to penalize a presidential elector if they refused to vote for the candidate they pledged to support, commonly referred to as “faithless electors.” The case is cited as the Colorado Department of State v. Michael Baca, et al.

“The Justice believes that her impartiality might reasonably be questioned due to her friendship with respondent Polly Baca,” the clerk, Scott Harris, wrote in the letter (pdf). “The initial conflict check conducted in Justice Sotomayor’s chambers did not identify this potential conflict.”

Harris added that Sotomayor will still participate in a similar case from Washington state, cited Chiafalo v. Washington. The two cases, which were initially consolidated, will be heard separately.

Polly Baca, a former Democratic Colorado legislator, is one of the respondents in the Colorado case who sued the state to block the enforcement of its law that direct how electors perform their duties and impose consequences when they fail to do so.

“We’re all excited about your nomination and confirmation,” Baca said in the call, reported the Post at the time. “We wanted you to know how proud and honored we are.”

The Supreme Court agreed to review the two cases in January and oral arguments for the case is scheduled for April 28. The 10th Circuit Court of Appeals ruled in August last year that Electoral College members in the Colorado case are free to vote for the presidential candidate they prefer and can’t be bound by the popular vote in their respective states. This prompted the state to appeal to the Supreme Court.

When an elector does not vote for a candidate who was chosen by the popular vote, some states provide that the deviant vote be canceled, and the elector replaced, according to FairVote.org.

Meanwhile, some states allow the vote to stay but would impose a penalty on the elector. Some states also allow both the canceling of the vote and a penalty.

Both Washington and Colorado have laws that direct how electors perform their duties and enforce consequences for casting a vote that deviates from the will of the people.