Horowitz confirmed the investigation during sworn testimony before the House judiciary committee. The inspector general and FBI Director Christopher Wray appeared before the committee to answer questions about the recently released report on the handling of the Hillary Clinton email investigation.

“We received a referral on that from the FBI,” Horowitz said in response to a question from Sen. Chuck Grassley (R-Iowa) about Comey’s leak. “We are handling that referral, and we will issue a report when the matter is completely consistent with the law and rules.”

Grassley has determined that at least one of the memos Comey sent to his friend, Columbia University professor Daniel Richman, contained classified information. The memos contain Comey’s recollections about his meetings with Trump and served as a stepping stone to the appointment of special counsel Robert Mueller to investigate alleged ties between the Trump campaign and Russia.

Grassley cited a television appearance in which Comey said that it would be “frivolous” for the inspector general to produce a report about his leaks. Horowitz clarified that a report is, in fact, forthcoming.

The confirmation of the investigation into Comey’s leak came just days after the DOJ Office of the Inspector General released a report that featured a scathing critique of a culture of leaking that permeated the FBI during its investigation of the Clinton email probe.

According to the report, at least 50 FBI employees were in touch with the media at different times. Many did so without either authorization or official rationale for doing so. The report describes numerous FBI employees accepting improper gifts from the media, including golf outings and tickets to sporting events.

In response to the committee’s questions about the leaks, Wray outlined a series of steps he is taking to fix the culture of improper disclosure, including the creation of a leak investigation unit within the bureau and plans to have every employee review the new media-contacts policy he released late last year.

“The FBI has managed to promote a culture that winks at unauthorized disclosures to the press, but punishes legally protected whistleblowing,” Grassley said at the hearing on June 18. “It stiff-arms Congressional oversight to hide embarrassing facts, while it leaks self-serving tidbits to friendly reporters bearing gifts. Director Wray has quite a mess to clean up.”

Comey led the FBI at a time when the bureau conducted both the criminal investigation of Clinton’s use of a private server and the counterintelligence investigation of the Trump presidential campaign’s alleged ties to Russia. At the hearing on June 18, Sen. Orrin Hatch (R-Utah) said that the two probes were the most important in the bureau’s history.

Horowitz, who oversees a staff of 400, has been investigating the FBI’s handling of Clinton’s use of a private server for 18 months. His final report, released on June 14, is the culmination of interviews with over 100 witnesses and the review of over 1.2 million documents. Horowitz concluded that bias was pervasive among the key FBI employees working on the Clinton probe, but found no evidence to show that the bias affected the outcome of the investigation.

The report is particularly critical of Comey, showing that he usurped the power of the attorney general to publicly announce the exoneration of Clinton. Comey also concealed his decision to make the announcement from his superiors with the intent of preventing them from stopping him, the report found. As FBI director at the time, he used a private email address for government business while investigating Clinton for doing the same.

Comey’s right-hand man at the agency, former Deputy Director Andrew McCabe, was fired earlier this year for authorizing a self-serving leak and allegedly lying about it to Comey and to investigators, including under oath.

Asked to testify before the House judiciary committee, McCabe said via his attorney that he would invoke his Fifth Amendment rights protecting against self-incrimination. Comey declined to appear twice, listing an overseas trip as the most recent reason for not being able to appear.

“Mr. Comey’s attorney tells us he is out of the country, although I saw he was in Iowa over the weekend. According to his twitter feed, he seems to be having a wonderful time,” Grassley said on June 18. “He has time for book tours and television interviews, but apparently no time to assist this Committee, which has primary jurisdiction over the Justice Department.”

The confirmation of the probe into Comey’s leaks comes less than two weeks after federal prosecutors indicted the head of security for the Senate intelligence committee for lying to the FBI as part of a probe into leaks. The indictment details extensive contact between the senior staffer and several reporters.

At the hearing on Monday, Wray took time to emphasize that the behavior of the senior officials and agents working the Clinton-email probe is not representative of the 37,000 rank-and-file FBI employees across the nation. The director said that the bureau’s employees saved 1,300 children from the hands of predators this year alone and pointed to the FBI’s counterterrorism work and arrests of violent gang members.

To underline the significance of the report, Wray said he gave his first press conference in 10 months shortly after the document was released. The director is also planning a full day’s training for every Senior Executive Suite FBI employee in the nation. The bureau will also review its processes for conducting sensitive investigations to prevent the same kinds of decisions made in the Clinton email probe. 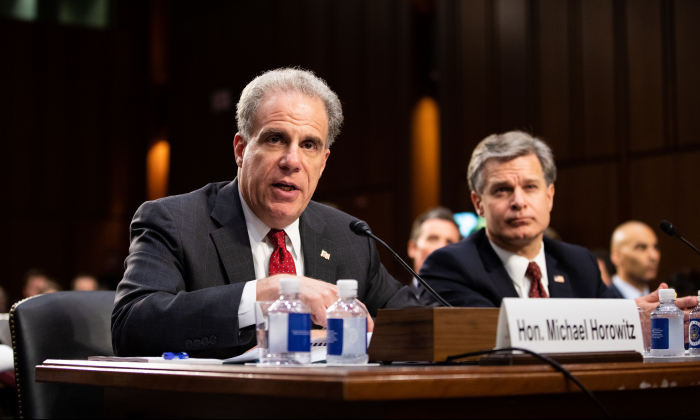