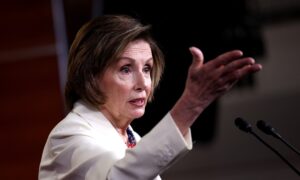 A large group of protesters stand on the east steps of the Capitol Building in Washington on Jan. 6, 2021. (Jon Cherry/Getty Images)
Crime and Incidents

The Department of Justice (DOJ) on Thursday released new bodycam footage from the Jan. 6 Capitol breach that shows a violent confrontation between police and a protester wielding a metal flag pole who faces multiple charges including assault with a dangerous weapon.

The footage, obtained by CNN and other outlets, purports to show Thomas Webster, a former Marine and retired New York City Police Department officer, shouting at Capitol police across a barricade before a scuffle breaks out.

The video complements the content of a criminal complaint against Webster (pdf), which includes stills from the bodycam footage, along with allegations that Webster “aggressively” shoved a metal barricade into a Metro Police Department (MPD) officer before “arming himself with the metal flagpole.”

The criminal complaint alleges that Webster then swung the flagpole at the officer several times before the policeman managed to wrest it away from him. Webster then allegedly charged at the officer, tackled him, pinned him to the ground, and tugged on his face mask and helmet.

“During the interview, [the MPD officer] advised that the individual who had assaulted him attempted to rip off [the MDP officer’s] helmet, and that he was being choked by his chin strap and was unable to breathe during this portion of the assault,” the complaint states.

Webster has been charged with seven counts, including Assaulting, Resisting, or Impeding Certain Officers Using a Dangerous Weapon; Civil Disorder; Disorderly and Disruptive Conduct in a Restricted Building or grounds with a Deadly or Dangerous Weapon; and an Act of Physical Violence Within the Capitol Grounds or Buildings.

He has pleaded not guilty to all counts.

Federal prosecutors say about 440 people were arrested on charges related to the Jan. 6 Capitol breach in the first 120 days following the incident, including over 125 individuals charged with assaulting or impeding law enforcement.