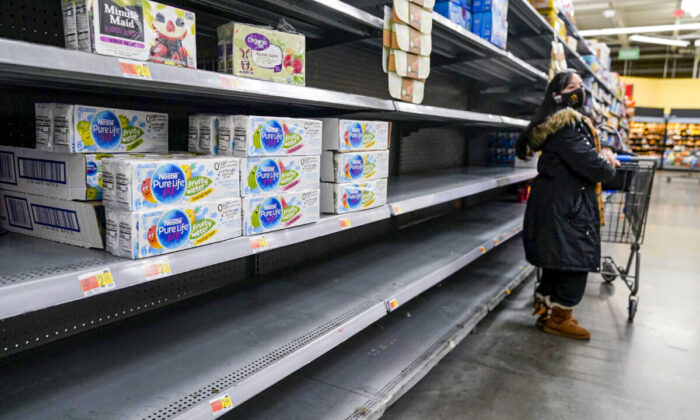 A woman looks over shelves, some of which are empty, at a Walmart store in Teterboro, N.J., on Jan. 12, 2022. The Justice Department is launching a new initiative aimed at identifying companies that exploit supply chain disruptions in the U.S. to make increased profits in violation of federal antitrust laws. (AP Photo/Seth Wenig, File)
Economy

The Justice Department announced on Feb. 17, that it is launching an initiative to investigate companies that are profiteering from supply chain disruptions in the United States in violation of federal antitrust laws.

The initiative, which will be spearheaded by the Justice Department’s antitrust division and the FBI, comes amid public pressure on the Biden Administration to handle rising price inflation caused by shortages, among other factors.

The White House is facing increased pressure to ease inflation as producer prices rose 9.7 percent in January, a near-record high.

“The lingering challenge of supply chain disruptions from the COVID-19 pandemic has created an opportunity for criminals to fix prices and overcharge customers,” said Assistant Director Luis Quesada of the FBI’s Criminal Investigative Division.

“The FBI and our law enforcement partners will continue to collaborate and investigate schemes that violate our antitrust laws and stifle our economic recovery,” he added.

The economy has been plagued by backlogs in the supply chain and labor shortages in business and retail, causing price spikes across the country, largely due to the pandemic.

The DOJ believes that supply chain issues have left an opportunity for companies to fix prices and overcharge customers “for their own illicit gain,” and that the department and the FBI will prosecute any antitrust violations they uncover.

The FBI will prosecute antitrust violations, including agreements between individuals and businesses to fix prices or wages as acts of collusion, said the DOJ.

“The Antitrust Division will not allow companies to collude in order to overcharge consumers under the guise of supply chain disruptions,” Kanter said.

The antitrust division has also formed an international working group focusing on alleged global supply chain collusion with its counterparts in the United Kingdom, Australia, New Zealand, and Canada.

This international working group, made of the five main countries in the Anglosphere, also known as Five-Eyes, will share intelligence utilizing existing common investigative tools, to detect and combat collusive schemes.

Meanwhile, the White House has launched a campaign against what it calls “Big Meat,” accusing meatpacking industry consolidation to be behind price hikes in that industry.

“You could call it jacking up prices during a pandemic,” Psaki said.

Industry groups and the U.S Chamber of Commerce, however, point to labor shortages and energy costs rather than consolidation as the problem.

“This tired approach is not surprising because they have refused to engage with the packing and processing sector they attack, going so far as to hold a roundtable on meat packing without a single beef or pork packer present,” continued Potts.

The Biden administration has been focusing much of its efforts on backlogged ports on the West Coast in order to untangle U.S. supply chains.

Officials have said the situation is improving, but the Port of Long Beach is still dealing with a backlog of idle cargo vessels.