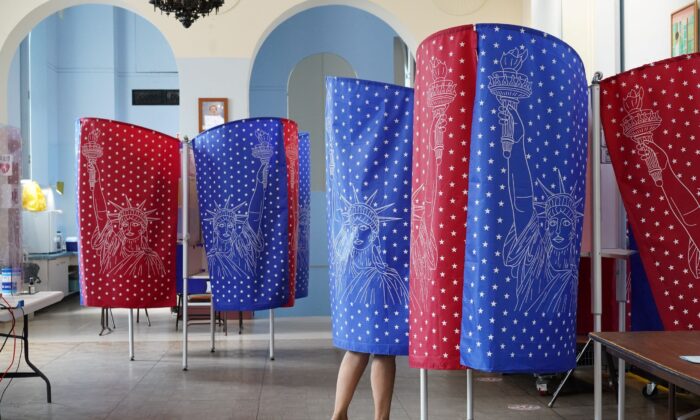 A voter fills out a ballot at Middletown Senior Center in Middletown, N.Y., on the primary day of Aug. 23, 2022. (Cara Ding/The Epoch Times)
Economy

A new poll shows that just 1 percent of registered U.S. voters say the economy under President Joe Biden is “excellent,” a figure that dropped to zero when the survey took into account the opinion of all adult Americans.

The findings of the Aug. 31 Quinnipiac poll (pdf) also showed a majority of American adults (58 percent) disapprove of the job Biden is doing on the economy, rising to a whopping 94 percent for Republicans.

The share of U.S. adults who said the economy on Biden’s watch is “not so good” or “poor” was 79 percent.

Inflation remains the top concern (27 percent) among both registered voters and the overall adult population in the United States.

The poll comes about a week after the Bureau of Economic Analysis (BEA) released updated figures on economic growth, which showed that the U.S. economy contracted for the second consecutive quarter, meeting the rule-of-thumb definition for a recession.

The gloomy findings of the Quinnipiac poll come amid concerns of a sharp economic downturn as persistently high inflation has put pressure on the Federal Reserve to maintain its course of aggressive rate hikes.

A number of economists have warned of a U.S. recession that could be long and severe, with, for example, economist Nouriel Roubini recently describing analysts’ predictions for a short and mild economic downturn as “delusional.”

Roubini told Bloomberg in a recent interview that he expects the United States to be hit by a “severe recession and a severe debt and financial crisis.”

By contrast, some analysts have rejected the outlook for a long and severe recession, with Bank of America Chief Economist Michael Gapen telling Fox News in a recent interview that he expects a “mild downturn.”

The Fed, finding itself behind the curve on the inflation fight after initially downplaying jumping prices as “transitory,” has embarked on a swift tightening cycle.

The Fed has delivered a series of interest-rate hikes that have pushed its policy rate into the range of 2.25–2.5 percent. Despite the rate hikes, inflation has remained stubbornly high. The Fed’s preferred inflation gauge, the core Personal Consumption Expenditures Price Index, which strips out food and energy, was running at 4.6 percent in July, more than double the central bank’s inflation target of 2 percent.

Loretta Mester, president of the Federal Reserve Bank of Cleveland, said Wednesday that the Fed is determined to keep raising rates and keep them high as long as it takes—even if it means a sharper slowdown and higher unemployment.

Markets overwhelmingly expect the Fed to decide on another 75 basis-point rate hike at the policy-making meeting of the Federal Open Market Committee, on Sept. 21, according to the CME Fed Watch Tool, which puts the odds at 70 percent of a 0.75 percentage-point interest rate increase.

A market expectations gauge developed by the Federal Reserve Bank of Atlanta shows that investors expect the fed funds rate to peak at around 3.9 percent in March 2023, before falling to around 3.5 percent by the end of the year.