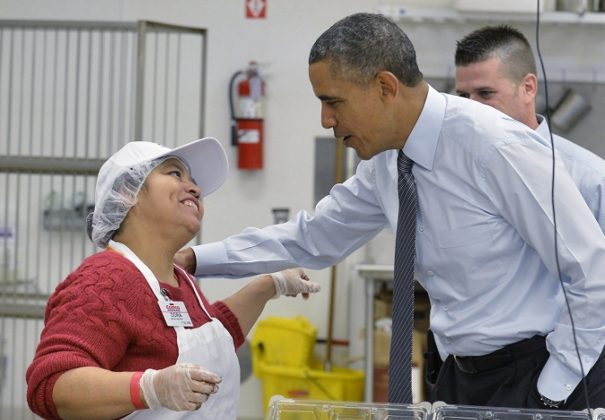 President Barack Obama (R) greets a Costco bakery employee during a tour of the store in Lanham, Maryland January 29, 2014. Obama is beginning a two-day, four-state tour to promote policies outlined in his State of the Union speech including raising the minimum wage. (Mike Theiler/Getty Images)
US

Jury’s Out on Wisdom of Raising the Minimum Wage

The president’s executive order requiring federal contractors to pay their employees a “fair wage of at least $10.10 an hour” was probably the most memorable initiative of Tuesday’s State of the Union speech.

President Barack Obama’s push to offset decades of inflation by raising the minimum wage would ripple through the economy and touch the lives of millions of workers and their families.

Republicans said some of those in need would be harmed, not helped. A higher minimum wage would dampen hiring, they said, or even lead to layoffs at a time when the nation is struggling with high unemployment.

“It’s bad policy, and it will hurt the very people the president purports to want to help,” House Speaker John Boehner said Tuesday.

About 1.6 million Americans work for minimum wage, mostly service industry workers, according to the U.S. Bureau of Labor Statistics.

Another 2 million people are paid even less, because of various exceptions in the law. Many are waiters, bellhops, and others whose wages are augmented by tips from customers. Their minimum is lower—$2.13 an hour—and hasn’t gone up for more than two decades.

Democratic lawmakers pushing for the increase predict it would lead to raises for some 30 million people due to pay scale adjustments that would have to be made by businesses, as well as other factors.

The last time the federal government acted to increase the minimum wage was in 2007. It was phased in to $7.25 in 2009. At this rate, full-time work yields $15,000 per year. For a worker supporting a family of two, that falls just below the federal poverty line.

“If you cook our troops’ meals and wash their dishes, you shouldn’t have to live in poverty,” Obama said Wednesday, promoting his initiative to workers at a Costco in Lanham, Md.

Costco was a symbolic place for the president to tout his policy agenda. The company is known for paying its workers higher than average wages. According to Obama, average pay for a Costco worker is $20.00 per hour. Entry-level workers make $11.50 an hour, well above the federal minimum wage of $7.25.

Ultimately, Obama wants Congress to raise the federal minimum wage to $10.10 per hour.

Obama put the federal minimum wage increase in terms clearly meant to be palatable to conservatives, yet he can expect resistance to the idea in the Republican-led House.

Obama said during his State of the Union the federal minimum wage is worth about 20 percent less (adjusted for inflation) than it was under Ronald Reagan. It was $3.35 for the eight years of Reagan’s administration.

Obama also evoked capitalist icon Henry Ford, who “realized he could sell more cars if his workers made enough money to buy the cars.”

“He had started this—factories and mass production and all that, but then he realized, if my workers aren’t getting paid, they won’t be able to buy the cars,” said Obama.

“And then I can’t make a profit and reinvest to hire more workers. But if I pay my workers a good wage, they can buy my product, I make more cars.”

Of Costco CEO Craig Jelinek, Obama said he was following the same logic as Henry Ford. He also joked that he could use a 50-pound bag of dog food for Sunny and Bo and that he’d like to take home an 80-inch flat screen for the Super Bowl.

An argument against raising the minimum wage is that these workers are not typically primary breadwinners, so they don’t need as much income. Also, requiring a wage increase will make it harder for businesses to hire entry-level workers.

Richard Burkhauser, professor of policy analysis at Cornell’s College of Human Ecology, said in a statement: “Increases in the minimum wage may be of value to those interested in symbolically helping the working poor, but the reality of past minimum wage increases is quite different for teenagers and low-skilled workers. They are job killers for low skilled workers.”

A minimum wage increase would not reduce poverty, according to Burkhauser.

He added the vast majority of those who benefit from minimum wage increases are not poor: they are second or third incomes in families which are not poor.

Another expert from Cornell thinks an increase in minimum wage to $10.10 is too little in the face of larger economic forces.

“President Obama gave a great performance last night and displayed compassion for the plight of the American middle class,” said Thomas Hirschl, professor of development sociology, in a statement.

“These dangerous trends will continue in spite of his program, and will push the country closer to economic collapse and depression,” he wrote.

The president would prefer to see things more optimistically.

“[R]aising the minimum wage doesn’t require new spending by the federal government. It doesn’t require a big bureaucratic program. It would help a lot of Americans make ends meet,” he said.

Additional reporting by The Associated Press