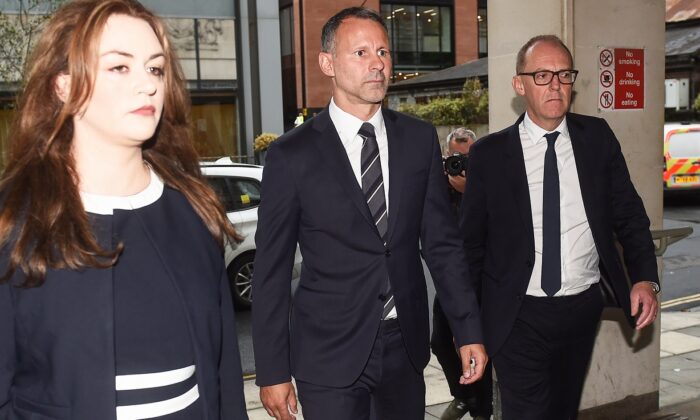 A jury has been discharged after failing to reach a verdict on domestic violence charges against the former Manchester United footballer Ryan Giggs.

The former Wales midfielder, 48, was accused of headbutting Kate Greville, 38, and coercively controlling her over a three-year period.

On Wednesday following over 22 hours of deliberations, the jury of seven women and four men—with one juror lost to illness—failed to reach any verdict on the former football star who had been on trial in Manchester Crown Court for four weeks.

A future trial may not be held until June next year.

Giggs was accused of psychologically and physically abusing Greville, during the course of their relationship, between August 2017 and November 2020.

Giggs had denied controlling or coercive behaviour towards his ex-girlfriend.

He also denied “losing control” and headbutting her and assaulting Greville’s sister, Emma, by elbowing her in the jaw, during a row at his home in Worsley, Greater Manchester on Nov. 1, 2020.

Giving evidence, he admitted his reputation as a “love cheat” was justified and he had been unfaithful in all his relationships. He said that he had never physically assaulted a woman or set out to control and coerce anyone.

Jurors first went out to consider verdicts late on the afternoon of Aug. 23.

Jurors were brought back into court in the afternoon of Aug. 31 and asked if they had reached an agreement on any counts.

The jury foreman told the court jurors could not reach any verdicts on any of the three counts Giggs denied.

Judge Hilary Manley thanked the jurors and discharged them from their duties.

‘More Will Be Clear in a Week’s Time’

Manley told Giggs that he would be bailed out until Crown Prosecution Service (CPS) lawyers meet and make a decision on any future trial and a trial date is set.

A hearing will take place at the same court next week.

Manley told Giggs that she has “permitted the prosecution a short period of time to consider their position. More will be clear in a week’s time.”

During the trial, Peter Wright QC said the “sad history” of the pair’s relationship revealed Giggs’ excesses were “endured, excused, and kept private” by Greville.

Defending, Chris Daw QC told jurors that there was no evidence of Giggs controlling anything and that Greville was a “scorned” woman furious at the defendant’s infidelity throughout their relationship.

According to Laureus World Sports Awards, Giggs is the most decorated player the English Premier League has ever produced, making more appearances than any other player in Manchester United’s history, spanning 963 appearances and 24 years, including 64 caps for his home country, Wales.