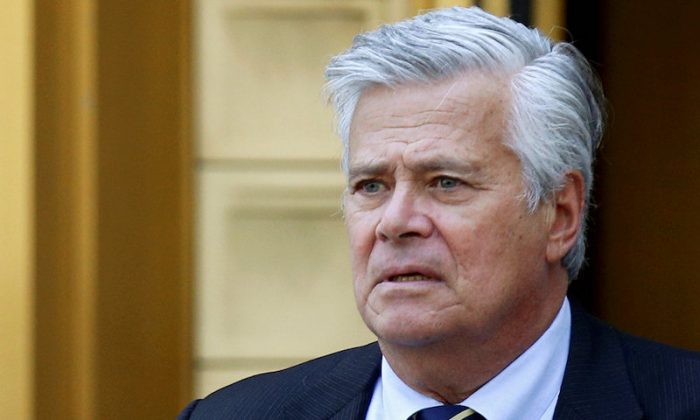 NEW YORK—Former New York State Senate majority leader Dean Skelos was found guilty of soliciting bribes and other federal corruption charges by a jury on Tuesday, nearly a year after an appeals court threw out an earlier conviction.

The federal jury in Manhattan also convicted Skelos’ son, Adam. Both men were found guilty of all the charges they faced, which in addition to soliciting bribes included extortion and conspiracy to commit honest services fraud.

Lawyers for the two men declined to comment after the verdict was announced. U.S. District Judge Kimba Wood, who presided over the trial, scheduled sentencing for Oct. 24.

Prosecutors accused the elder Skelos, a Republican from Long Island, of using his position to pressure three companies to provide his son with consulting work, a “no-show” job and a $20,000 payment.

Both men were found guilty by a jury in December 2015. Judge Wood later sentenced Dean Skelos to five years in prison and Adam Skelos to 6-1/2 years.

Last September, a federal appeals court in New York threw out the convictions. The court ruled that the jury had received improper instructions in light of the U.S. Supreme Court’s 2016 decision overturning the corruption conviction of former Virginia Governor Bob McDonnell.

The Supreme Court ruled that routine political activities such as arranging meetings were not “official acts” that could be prosecuted under federal bribery law.

Silver, a Democrat who represented Manhattan’s Lower East Side, was retried and found guilty on May 11. He is scheduled to be sentenced on July 27.

The cases against Skelos and Silver were among a series of high-profile corruption prosecutions against New York officials brought by former U.S. Attorney Preet Bharara, who served as the top federal prosecutor in Manhattan until he was fired by President Donald Trump last year.

Others indicted under Bharara included Joseph Percoco, a former aide to New York Governor Andrew Cuomo, and Alain Kaloyeros, a former president of the State University of New York’s Polytechnic Institute. Percoco was convicted in March, and Kaloyeros was convicted last week.