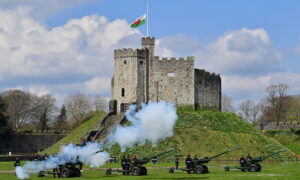 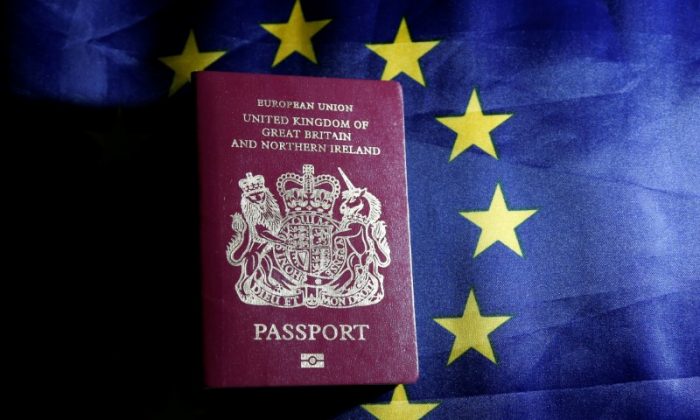 A British passport is pictured in front of an European Union flag in this photo illustration taken in Brussels, Belgium, June 20, 2016. (Reuters/Francois Lenoir/Illustration/File Photo)
UK

BRUSSELS—About one in 10 British civil servants at the European Commission has taken another EU nationality since the Brexit vote, but are nonetheless resigned to scant prospects of future promotion.

Figures from European Union data provided to Reuters and interviews reflect a pessimistic view of the future in Brussels for nearly 900 remaining British staff on the EU executive once Britain leaves the bloc in March next year following its June 2016 referendum.

They also highlight the role of nationality in EU career advancement despite a formal taboo on discrimination according to passport—as some Britons have already found to their cost.

“As Brits, our careers here are already finished,” said one mid-ranking official with over 20 years service at the Commission who, like many of those switching, has now acquired an Irish passport through descent.

“But no one will see me as Irish. This is basically just an insurance policy for now.”

President Jean-Claude Juncker gave British staff a formal undertaking in late March that the Commission would not exercise its right to dismiss them after March 29, 2019, when they lose the EU citizenship that is a normal requirement for employment.

But despite such sympathy at the top for their plight, Britons have already been voting with their feet.

Public data shows that on Jan. 1 this year there were 894 Commission employees whose officially recorded first nationality was British. That was down 135, or 13 percent, from a year earlier and 240, or 21 percent, fewer than at the start of 2016.

Internal data cited by an EU official showed that since May 2016 “slightly above 150” Britons retired, resigned or left at the end of the kind of temporary contract given to a quarter of the Commission’s 32,000 staff; some 65 British citizens were hired, but all but four of these were on short-term contracts.

Strikingly, compared to that net decline of 85, “slightly above 100” more Britons also switched their “first nationality” to another of the 27 EU states, notably to Ireland, where many millions of British people have roots, as well as to France.

In a tweet sent on the day after the Brexit vote devastated his colleagues, one British EU official with dual nationality posted a photo of a bottle of Irish whiskey. He wrote: “Time to connect with my Irishness to numb my wounded Britishness.”

Britain allows dual nationality, so those switching in the EU are not obliged to renounce their private UK citizenship.

Conversations with EU officials—none would speak on the record about personal choices—shows some Britons already had dual citizenship and have merely switched to the “first nationality” recorded in Commission records.

Some raced to acquire new passports after the referendum. Others also have another citizenship but have yet to formally switch to it, while many are thinking of or are applying to other countries.

Among these, notably, is Belgium. It has resisted granting citizenship to some EU officials, despite many having spent decades living in Brussels, on the grounds they have not been in the local tax system. Juncker appealed personally to the Belgian prime minister this month to show them compassion.

The issue of nationality in EU careers is a delicate one. Formally, officials “leave their passports at the door”, though officials also expect teams to reflect the bloc’s diversity.

A Commission spokeswoman told Reuters: “We can’t see how changing first nationality … could result in any sort of advantage. Promotions of EU officials are based on merit only.”

Even before Brexit, that view is contested by some who say privately that British colleagues have been passed over for expected promotions or removed from work that superiors feared could cause a conflict of loyalties between Brussels and London.

Some British EU staff say that has offended them, arguing that, if anything, they feel the Brexit vote has strengthened their commitment to a project people back home have abandoned.

“Since the referendum, I feel much less British—but the world sees me as much less European,”

Even those switching passports see little hope—certainly not in senior positions, where national governments are unlikely to lobby for what one Irish official described as “re-badged Brits”. Like other capitals, Dublin wants jobs for its own.

The number of Commission officials recording Irish first nationality rose by 37 to 520 in the two years to January.

An Irish EU embassy spokesman said the issue of British EU officials taking Irish nationality was “complex” and that the government was “continuing to monitor matters”.

Even without Brexit, Euro-Brits have been a vanishing breed, reflecting what many of them see as long growing indifference to the EU among British voters and successive London governments.

While they once made up closer to the 13 percent of the current EU population that Britain accounts for, they are today just 3 percent of Commission, albeit better represented in the senior ranks, reflecting longer EU membership than most states and more effort to see “national balance” across the top jobs.

Some British staffers speak of serving out time till their pension; others are sticking to EU ambitions, knowing that the Commission does hire some non-EU nationals with special skills.

Rather than linger in roles of diminishing responsibility, some are looking to follow colleagues into the private sector.

A few are tempted to move to a London civil service that may grow thanks to Brexit; others see little welcome from a British establishment they feel has done little for them. Amid anger, grief and uncertainty, there is a good deal of British stiff upper lip: “It’s not the end of the world,” said one. “No one’s going to be helicoptered off the embassy roof, Saigon-style.”

By Samantha Koester and Alastair Macdonald