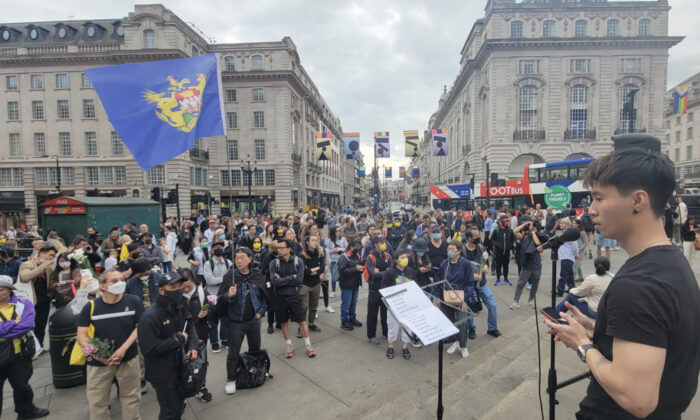 July 1 marks the 25th anniversary of Hong Kong’s handover from Britain to China. Before the Hong Kong National Security Law (NSL) came into effect in 2020, Hong Kong’s pro-democracy camp had been holding an annual July 1 protest to symbolize Hong Kong’s continued rights to freedom of expression and demonstration.

However, that changed in July 2022 when the Chinese Communist Party (CCP) leader Xi Jinping visited Hong Kong. All demonstrations were banned, and no one dared to hold any demonstrations in Hong Kong.

Hongkongers around the world, on the other hand, organized different parades and rallies throughout the United Kingdom, Canada, the United States, and other places to continue the spirit of the Hong Kong Protests.

On July 1, 2022,  around 10 memorial events were held across the UK, spanning from cities of England and Scotland, including London, Manchester, Birmingham, Edinburgh, Bristol, Newcastle, Sheffield, and Aberdeen.

At 6 p.m. local time on July 1, the Good Neighbor Church England, an organization founded by Hongkongers in the UK, held a memorial event, July 1, Commemoration of the 1st Death Anniversary of Leung Kin-fai, at Piccadilly Circus, in central London. A few hundred people attended on the day. The organizers first led the attendees to observe a minute of silence for Leung Kin-fai and read out Bible chapters, after which many people presented flowers one by one to show their condolences.

Leung Kin-fai was a 50-year-old male who committed suicide after attacking a policeman in Hong Kong. At about 10 p.m. on July 1, 2021, Leung suddenly approached a 28-year-old mobile unit police officer from behind and stabbed him with a knife, right outside the Sogo Department Store in Causeway Bay, before Leung stabbed himself in the heart and died by suicide.

Baggio Leung said that since the implementation of the NSL, the CCP has not stopped persecuting Hongkongers and silencing dissidents. Leung said, “I know many overseas Hongkongers are fighting for the day when they can return home. I hope everyone will always remember your identity as Hongkongers.” Leung also reminded everyone that they should continue to show the world that Hongkongers will continue to fight for freedom and justice.

Benedict Rogers of Hong Kong Watch said ever since the CCP imposed the NSL, Hong Kong’s rule of law and freedom are completely tarnished. Many of the Hongkongers he knows have been held against their will in Hong Kong prisons. Rogers also chimed the anti-extradition movement’s signature slogan “Liberate Hong Kong, Revolution of Our Times” repeatedly to remind Hongkongers not to give up and continue to fight for freedom.

When everyone arrived at their next stop, another Hongkonger group Hong Kong Aid, took over the crowd of about 700 people and carried on with the second memorial of Leung Kin-fai. Flowers, banners, and candles filled the grounds of the Hong Kong Economic and Trade Office, London.

The spokesperson of the second mourning, first read aloud the names of Hongkongers who passed away during the anti-extradition movement in 2019. A minute of silence was observed, while some people burnt CCP’s flags.

Two Hongkonger organizations in Manchester, The Hong Kong Independence Union, and the Hong Kong Indigenous Defence Force, held an assembly rally called “Say No to Hong Kong Police State.” 1000 people were in attendance on the evening of July 1 by Peter Square.

The spokesman first led the group to mourn all the Hongkongers who died in support of the Hong Kong democracy and freedom movement. The crowd marched through many streets in the city center, chanting slogans such as “Liberate Hong Kong, Revolution of Our Times” and “Say No to CCP” along the way. Anti-CCP slogans seem to have resonated with a large number of locals,  some even applauded to show their support.

In a recording played during the rally, Taiwanese current affairs commentator Sang Pu said the situation in Hong Kong has further deteriorated since the CCP implemented the NSL. He said the new chief executive John Lee Ka-chiu was elected in a spurious election and had no right or legitimacy to represent Hongkongers: “We need to say no to John Lee and Hong Kong becoming a police state.”

Hong Kong’s democratic rights activist and entertainer Joey Tay said that July 1, is the “Remembrance of Martyrdom Day” in Hong Kong every year. Tay described the former Chief Executive Carrie Lam Cheng Yuet-ngor had become an outcast of the CCP, while the new chief executive John Lee Ka-chiu enters the scene and will turn Hong Kong into a police state.

Tay also believed that Lee does not have the qualifications to be Hong Kong Chief Executive as part of the U.S. sanctioned list.

The Last Governor of Hong Kong

On the same evening, the human rights group Hong Kong Watch conducted a book signing party for the latest book of the last Governor of Hong Kong, Chris Patten, “The Hong Kong Diary,” with 400 people present.

At the signing, Patten called John Lee Ka-chiu “Officer Lee” and criticized him for being selected by a group of “agents” and “traitors;” Lee only became the chief executive because he had been in charge of policing and used his iron fists to squash down peaceful demonstrations.

Meanwhile, Lord Patten reminded everyone that the most crucial thing to do is to make sure we continue to understand what’s happening to Hong Kong and not be clouded by CCP’s propaganda. He also warned that communist stooges have been rewriting Hong Kong history and erasing any truth of Hong Kong being a colonialized city once upon a time.

On the other side of the world, Hongkonger organization NY4HK and Project Black Mask HK were joined by 100 people in New York. Participants rallied in black while carrying banners of “Liberate Hong Kong, Revolution of Our Times” and “Release All Arrestees.” The demonstrators chanted “Free Hong Kong” from New York Time Square to The Chinese Consulate.

Terry, the organizer of the New York event, said July 1 is a disastrous day for Hong Kong: the Chinese Communist Party has trampled on One Country, Two Systems, turning a free city into a terrifying Chinese state. He continued that although Hongkongers have been fighting for three years, he knows they will never give up the fight for: freedom of the press, freedom of speech, and universal suffrage that every Hongkonger rightfully deserves.

An unnamed founder of Students for Hong Kong said, “In 2019, Hong Kong students experienced and defended their campuses of the Chinese University of Hong Kong, the Polytechnic University of Hong Kong during the sieges by the Hong Kong Police, the brave students did not care if they were going to be arrested, hurt, or sacrificed. He hopes overseas Hongkongers will use the rights they enjoy elsewhere to fight for the people who remain in Hong Kong.

Despite the organizers of the now-disbanded Civil Human Right Fronts, Jimmy Sham and Figo Chan, having been in jail and silenced, some citizens still took a risk to go to Causeway Bay.

The Epoch Time’s reporter interviewed a couple of senior locals.

A 75- year-old man in a yellow mask with the writing of FDNOL, which stands for five demands, not one less, was meeting his friends in a symbolic location, Causeway Bay just to walk around.

The group of elderly recalled how busy it was on the day of the anti-extradition march back in 2019, compared to the ghostly town right now. They are not too happy that democracy is dying in Hong Kong. “Young Hongkongers should leave Hong Kong when they can now. Just leave us oldies here to ‘tang ping’ (lying flat). We are used to seeing the threats CCP throws. we are not scared, and they are in the wrong.”

In Taiwan, Su Tseng-chang, Premier of Taiwan, the Republic of China, criticized the CCP for breaking their promise of “Unchanged 50 years” to Hongkongers, collapsed after only 25 years.

“What China had promised Hongkongers once upon a time is now being exposed to the world, despised by Hong Kong citizens. What we must know now, more than ever, is that Taiwan has to defend its rights, power, and democracy, because the so-called “One Country, Two Systems” just doesn’t exist.”