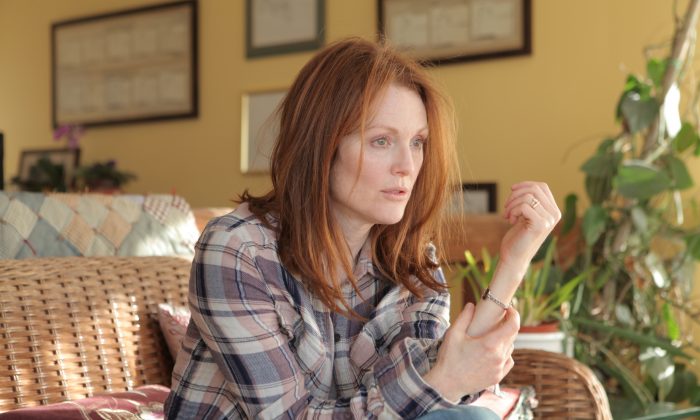 For a woman of incredible ambition where language and knowledge are the epitome of accomplishment, Alzheimer’s is the worst possible disease.

Make it early onset Alzheimer’s that comes on like a freight train at the peak of a world-renowned career, and it’s a blow that could lead anyone to suicide. Especially with the prospect of becoming a burden on those you most love, whose only options are to cope as best they can with your increasingly glazed expression or shuffle you off to a nursing home and live with the guilt.

Howland poured herself into life. She wanted it all—kids, a career, a husband, and a home that anyone would be proud of it. Now it’s all slipping away.

It starts with forgetting a few words and mild confusion, but it continues, and soon she finds herself lost on her daily jog through the campus she should know like the back of her hand.

She visits a neurologist who tells her Alzheimer’s is a possibility, he’ll need to run tests. Howland doesn’t sleep that night and wakes her husband, played by Alec Baldwin, to tell him the fear she’s been harbouring and the possibility she is losing her mind. He’s dismissive. Not possible, he tells her, she’s far too young.

The movie’s just begun, but it’s clearly going to be a tearjerker. Wet eyes and sniffles dotted the press and industry audience at the special screening of “Still Alice” during its premiere run at the Toronto International Film Festival.

Moore delivers in every scene. She shows us capable Howland, and then tears the character down one memory at a time, getting lost in her own home, facing the worst of indignities.

There’s no cure, and it can’t be slowed. Early onset Alzheimer’s is stealing Howland’s mind—a world-renowned professor now afraid to have dinner with colleagues for fear of looking the fool. She’d rather have cancer, she says, at least then there’s no shame. Nobody would think her ridiculous.

“Still Alice” gives audiences a deeply personal experience of Alzheimer’s with a script based on Lisa Genova’s celebrated book. It shows us the weight a family carries when one of its members is struck with the disease. But more so, it tells us the tale of Howland’s descent and asks us to wonder, “What is a person?” When memories disappear and personality dissolves, what remains?

In one scene, Howland visits a nursing home, where the nurse naturally assumes Moore’s character is visiting a parent. The scene confirms the worst possibilities. Confused, lonely, easily angered people, much older than herself, sit alone in chairs, some cradling dolls, some with alarms that sound if they rise from their chairs due to problematic behaviour in the past.

To imagine living 10 years in such a state is bad, but for Howland, at just 50, it’s a lifetime.

“Still Alice” could easily have become a depressing movie. It had every right to, but it’s not.

Moore’s character isn’t alone. She’s surrounded by family. Daughters played by Kristen Stewart and Kate Bosworth pop in and out of the film, as does her husband. They are important satellites, but Moore is the planet they circle.

But “Still Alice” isn’t triumphant either. There is no winning against Alzheimer’s disease. The hill can be steep, or gradual, but it only goes down.

This is a sensitive movie with swift but subtle performances and a screenplay that lingers where it needs to and delivers the emotional body blows any film about this disease would need to pack. Definitely worth 99 minutes of your life.