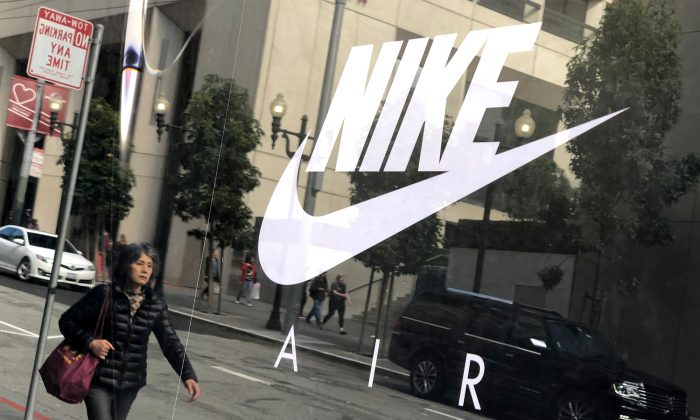 Two Democratic presidential candidates said they support Nike’s decision to pull shoes that had an older version of the American flag emblazoned on them.

Nike’s recall was reportedly made in response to concerns conveyed by former NFL quarterback Colin Kaepernick, who started the trend of kneeling during the national anthem.

The red, white, and blue shoes have a Betsy Ross flag on them. The older version of the American flag sports 13 stars representing the original 13 colonies. According to the Library of Congress, legend says that George Washington commissioned Ross, a Philadelphia seamstress, to create the flag in 1776.

Julian Castro, a former official in the Obama administration, said he was pleased to see Nike pull the shoes with the flag.

“I was glad to see that. And my hope is that they didn’t just do it to do it. They understand the significance there. And look, there are a lot of things in our history that are still very painful,” Castro told CBS on July 3.

“The Confederate Flag that still flies in some places, and is used as a symbol. And I believe we need to move toward an inclusive America that understands that pain.”

O’Rourke, the former Texas representative who lost a 2018 challenge to Sen. Ted Cruz (R-Texas), also said he supported the decision.

“I think its really important to take into account the impression that that kind of symbol would have for many of our fellow Americans. So I respect the decision Nike made and more importantly grateful for the conversation that this is producing,” he told reporters in Iowa, according to the Jewish Insider. O’Rourke previously said he supported Kaepernick and other NFL players kneeling during the national anthem.

“I love America. I stand for the anthem, respect the flag & honor the men & women who fought to defend our Nation,” Cruz wrote on Twitter on Tuesday morning. “I respect Free Speech & I’m exerting mine: until [Nike] ends its contempt for those values, I WILL NO LONGER PURCHASE NIKE PRODUCTS.”

He called for people to boycott Nike.

Arizona Gov. Doug Ducey, a Republican, announced that the state was withdrawing incentives it had offered Nike for a new manufacturing site following the recall.

I love America. I stand for the anthem, respect the flag & honor the men & women who fought to defend our Nation. I respect Free Speech & I’m exerting mine: until @Nike ends its contempt for those values, I WILL NO LONGER PURCHASE NIKE PRODUCTS. #WalkAwayFromNike RT if you agree. https://t.co/IvXNTgvlHq

“Nike has made its decision, and now, we’re making ours,” Ducey said.

“I’ve ordered the Arizona Commerce Authority to withdraw all financial incentive dollars under their discretion that the State was providing for the company to locate here. Arizona’s economy is doing just fine without Nike. We don’t need to suck up to companies that consciously denigrate our nation’s history.”

“I am embarrassed for Nike,” Ducey added.

Hey, @Nike — we’re just a quick jaunt over the border…

Thank you for doing the right thing. CA is open for business and welcomes those that represent the best of our American values. pic.twitter.com/dLN7EuYBFS

California Gov. Gavin Newsom, a Democrat, responded to Ducey’s announcement by inviting Nike to open a site in his state.

“Hey, @Nike — we’re just a quick jaunt over the border,” he wrote in a tweet, sharing a screenshot of one of Ducey’s posts.

“Thank you for doing the right thing. CA is open for business and welcomes those that represent the best of our American values.”