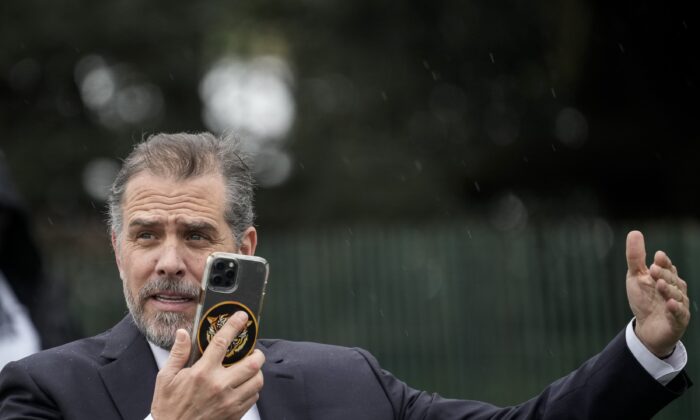 Advocacy group Judicial Watch has filed a lawsuit against the Department of Homeland Security (DHS) alleging that the agency is slow-rolling a Freedom of Information Act (FOIA) request to turn over records tied to President Joe Biden’s son, Hunter Biden.

Judicial Watch filed the FOIA suit against DHS on July 17 at the U.S. District Court for the District of Columbia, asking the court to force the agency to turn over all non-exempt records concerning government-provided security services to Hunter Biden or companions on any international trips from 2010 to 2013.

The advocacy group said in a July 20 statement that the Secret Service, which is part of DHS, had “failed to respond adequately” to three FOIA requests in March and April demanding records of security services—and related use of taxpayer funds—provided to Hunter Biden and companions.

DHS didn’t respond by press time to an Epoch Times request for comment on the lawsuit.

‘Questions Have Been Raised’

The backdrop for the lawsuit is Secret Service records obtained by Judicial Watch in 2020 showing hundreds of international trips taken by Hunter Biden during the first several years of the presidency of Barack Obama while receiving Secret Service protection.

“While it is typical for the families of the president and vice president to travel with them, questions have been raised about whether Hunter Biden used the government trip to further his business interests,” Judicial Watch stated.

Missing from the records the advocacy group obtained in 2020 was information on whether Hunter Biden’s travel was on Air Force One, Air Force Two, or other government aircraft or whether other family members were present.

Judicial Watch’s complaint indicates that the Secret Service had acknowledged the group’s FOIA request and by April 19 had “located potentially responsive records, was processing the records, and would send them” to Judicial Watch “upon completion of the processing.”

But those records haven’t been handed over to Judicial Watch, nor has DHS explained why it hasn’t yet transmitted the documents, the complaint alleges.

Besides Judicial Watch, Republicans in Congress have also sought Secret Service records tied to Hunter Biden’s travels while his father was vice president.

While the Secret Service turned over 259 pages of records (pdf) to Sens. Ron Johnson (R-Wis.) and Chuck Grassley (R-Iowa), the pair of senators objected to what they said were “extensive” and “improper” redactions that impede their ability to “understand the full scope of the interactions between Hunter Biden, his associates,” and the Secret Service.

Grassley and Johnson have been probing Hunter Biden’s overseas business dealings. The senators released a report in 2020 (pdf) that said Hunter Biden’s job with Ukrainian energy firm Burisma created a “potential conflict of interest” for his father, who was heavily involved in U.S. policy toward Ukraine.

In 2019, Hunter Biden sat for an interview with ABC News, in which he insisted he hadn’t done anything “improper” in his business dealings, although he acknowledged “poor judgment.”

Hunter Biden told the media outlet that he “did nothing wrong at all,” but conceded that it was “poor judgment to be in the middle of something that is … a swamp … in many ways.”