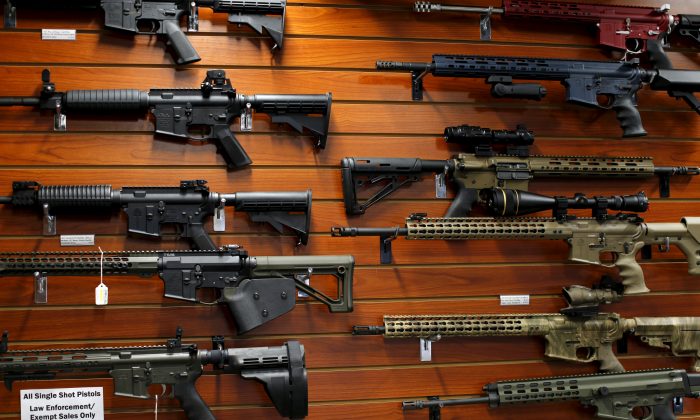 A federal judge has struck down a 95-year-old California law banning firearms dealers from placing ads for handguns or images of handguns on their storefronts.

In a decision made public on Sept. 11, U.S. District Judge Troy Nunley in Sacramento, the state’s capital, said the law was “unconstitutional on its face” because it violated dealers’ commercial speech rights under the First Amendment.

But Nunley found the law too narrow, saying dealers could still use print or radio ads or even display large neon signs trumpeting “GUNS GUNS GUNS.” It was also too broad, by restricting speech to all adults regardless of their personality traits, he ruled.

“The government may not restrict speech that persuades adults, who are neither criminals nor suffer from mental illness, from purchasing a legal and constitutionally-protected product, merely because it distrusts their personality trait and the decisions that personality trait may lead them to make later down the road,” the judge wrote.

The office of California Attorney General Xavier Becerra had defended the law, which is part of the state’s penal code.

Officials from the attorney general did not immediately respond to requests for comment on Sept. 12.

Nunley’s decision is a victory for Tracy Rifle and Pistol, Ten Percent Firearms, and other dealers that said the law infringed their right to display “truthful, non-misleading” handgun ads, or risk fines or license revocations.

“It reaffirms the trend in the law that the Supreme Court has been very clear on, that government cannot restrict truthful advertising because it fears that law-abiding citizens will make decisions it doesn’t approve of,” Brad Benbrook, a lawyer for the plaintiffs, said in an interview on Sept. 12.