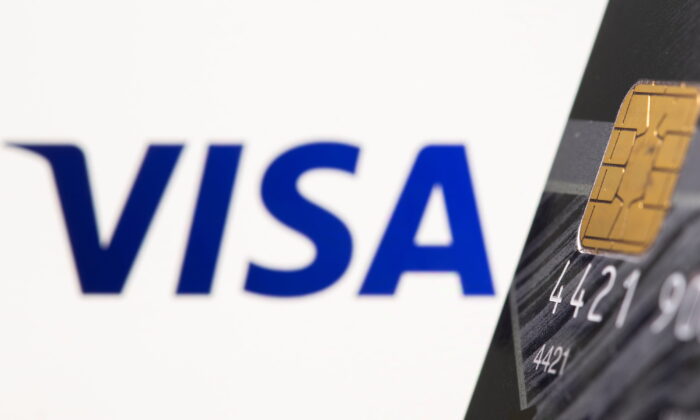 Credit card is seen in front of displayed Visa logo in this illustration taken on July 15, 2021. (Dado Ruvic/Reuters)
Judiciary

The video was posted without her knowledge or consent.

Fleites’s attorneys allege in her lawsuit that Visa “explicitly agreed with MindGeek to process the financial transactions from which the defendants profited from the [sex trafficking] venture.”

In his ruling on Friday, Carney held that the plaintiff “adequately alleged” the possibility that Visa’s payment network was used in relation to her videos and that Visa has control over deciding whether to recognize MindGeek as a merchant.

However, the judge ruled partly in favor of Visa, noting that Fleites “simply has no basis for claiming Visa directly participated in the sex trafficking ventures that harmed her” and ordered that she must provide “a more definite statement with respect to her common law civil conspiracy cause of action against Visa.”

In a statement to The Epoch Times following Friday’s ruling, a Visa spokesperson said: “Visa condemns sex trafficking, sexual exploitation and child sexual abuse materials as repugnant to our values and purpose as a company. This pre-trial ruling is disappointing and mischaracterizes Visa’s role and its policies and practices. Visa will not tolerate the use of our network for illegal activity. We continue to believe that Visa is an improper defendant in this case.”

A spokesperson for MindGeek told Variety in a statement: “At this point in the case, the court has not yet ruled on the veracity of the allegations, and is required to assume all of the plaintiff’s allegations are true and accurate. When the court can actually consider the facts, we are confident the plaintiff’s claims will be dismissed for lack of merit.”

They added that MindGeek has “zero tolerance for the posting of illegal content on its platforms, and has instituted the most comprehensive safeguards in user-generated platform history” while noting that the company has also banned uploads from anyone who has not submitted a government-issued ID that has also passed third-party verification.

The spokesperson also said that MindGeek has “eliminated the ability to download free content, integrated several leading technology platforms and content moderation tools, and instituted digital fingerprinting of all videos found to be in violation of our Non-Consensual Content and [child sexual abuse material],” among other things.

“Any insinuation that MindGeek does not take the elimination of illegal material seriously is categorically false,” the statement added.