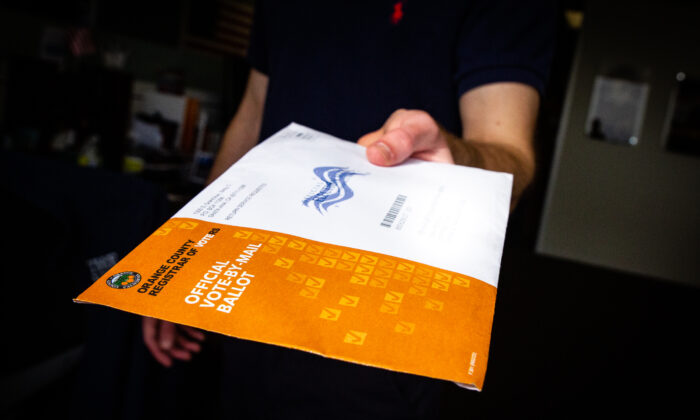 A new vote-by-mail law enacted in Delaware earlier this summer was ruled unconstitutional by a judge on Wednesday, meaning that Delawareans will not be able to vote by mail in the upcoming election scheduled for Nov. 8.

In an 87-page opinion, Vice Chancellor Nathan Cook ruled that the law, which allows Delaware voters to vote by mail in the general election without providing a reason for doing so, violates a provision in Delaware’s constitution known as Article V, Section 4A.

That provision provides general laws for absentee voting such as sickness or physical disability.

“Our Supreme Court and this court have consistently stated that those circumstances are exhaustive,” Cook wrote. “Therefore, as a trial judge, I am compelled by precedent to conclude that the vote-by-mail statute’s attempt to expand absentee voting to Delawareans who do not align with any of Section 4A’s categories must be rejected.”

“I must find that the vote-by-mail statute is unconstitutional for purposes of the general election,” the judge added.

Democrat lawmakers in the state introduced the vote-by-mail bill earlier this year after failing to win Republican support to amend the constitution. Such an amendment required a two-thirds vote by each chamber in two consecutive General Assemblies.

“Once the amendment to the Delaware Constitution failed to obtain the necessary two-thirds approvals, the General Assembly passed the Vote-by-Mail Statute that is the subject of this litigation less than three weeks later by simple majority approval,” Judge Cook wrote.

“The remarks by legislators indicate an awareness by at least some members of the General Assembly that the laws might not be constitutional and that a challenge in the courts would be forthcoming,” he added.

A lawsuit was swiftly filed within hours of the law going into effect challenging its constitutionality. Delaware Attorney General candidate Julianne Murray and GOP party chair Jane Brady were listed as plaintiffs in the lawsuit alongside political activist Nick Miles and others.

For their part, the defendants in the lawsuit, State Election Commissioner Anthony Albence and the State of Deleware Department Of Elections, had argued that the plaintiffs lacked standing to challenge the laws.

Murray praised the judge for carefully studying Delaware’s constitution when making his decision on Wednesday.

“He started on the Constitutional Convention of 1897 and worked his way through,” said Murray, who is the Republican nominee for attorney general in the November elections.

Retired judge Jane Brady, who is also the former Delaware attorney general said mail-in voting “does not comport with the constitution.”

Brady, who also represented plaintiffs in the lawsuit, said: “I believe that the legislature has known from day one that they needed a constitutional amendment to do this. In my view, they abdicated their responsibility.”

While judge Cook declared voting by mail in the state unconstitutional, he ruled that the plaintiffs had “failed to meet their burden of showing ‘clear evidence’ of a constitutional violation” with regards to the new same-day voter registration law that plaintiffs had also challenged, and thus upheld that law.

A spokesman for Democrat Attorney General Kathleen Jennings, whose office represented the Department of Elections in the lawsuit, referred questions to the elections agency. State Election Commissioner Anthony Albence declined to comment.

The ruling comes after President Joe Biden flew via Air Force One to Delaware, which is his home state, to cast his vote in the state’s primary election on Sept. 13.

Biden embarked on the costly trip, which comes at taxpayers’ expense, to cast a vote in the race for state auditor, where incumbent Kathleen McGuiness, a Democrat, is running for reelection against Lydia York, a lawyer who has been endorsed by the Delaware Democrat Party.

When asked by reporters why he had decided to fly in instead of returning an absentee ballot instead, Biden declined to comment. White House press secretary Karine Jean-Pierre on Wednesday defended Biden’s actions while onboard Air Force One en route to Detroit.

“The president has a very heavy schedule. He’s the president of the United States. It worked out best for him to vote yesterday, to vote on Tuesday,” Jean-Pierre said. “He thought it was important to exercise his constitutional right to vote, as I just mentioned, and set an example by showing the importance of voting.”