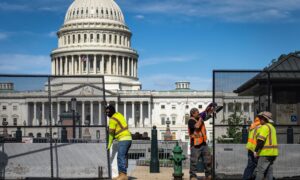 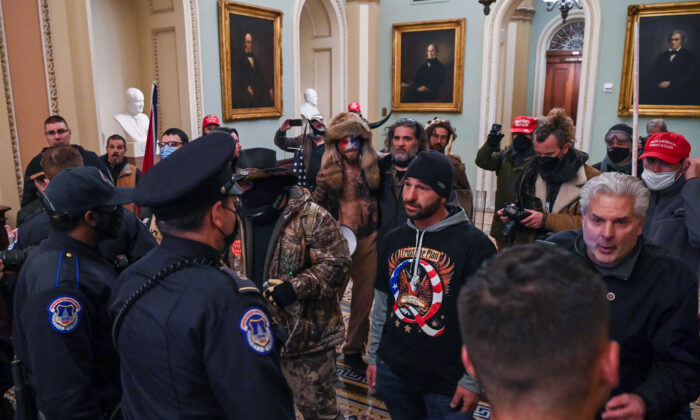 Douglas Jensen (C) speaks to U.S. Capitol Police officers inside the building in Washington on Jan. 6, 2021. (Saul Loeb/AFP via Getty Images)
US News

A federal judge this week ordered a man accused of illegally entering the U.S. Capitol on Jan. 6 to be freed from jail, as the man is not facing charges related to violence.

Douglas Jensen, 41, donning a T-shirt promoting the QAnon movement, was among the first people to force their way inside the Capitol in January, according to court documents.

Jensen “refused multiple orders by a uniformed Capitol Police officer to stop, place his hands up, and back up” and was seen in video footage “leading a crowd of followers” inside the building, an FBI agent wrote in one filing.

When the officer ordered Jensen to stop, Jensen “led the crowd toward the officer in a menacing manner,” the agent said, citing video footage from the scene. The officer retreated and was ultimately able to stop the crowd with assistance from other officers.

Prosecutors wanted the judge to keep Jensen, a Des Moines, Iowa, resident who turned himself in on Jan. 8, in jail pending trial. They said Jensen, who has admitted to being in the Capitol, had a knife on him in the building. They also said Jensen admitted to chasing the Capitol Police officer and wanting to stop then-Vice President Mike Pence from presiding over the electoral count certification.

Kelly said deciding whether to free Jensen from jail pending trial was a “close case.”

The judge said Jensen’s actions during his confrontation of Capitol officer Eugene Goodman were “deeply concerning and quite serious.” But he noted that Jensen is not accused of toppling any barricades, damaging any property, or fighting with anybody at the Capitol.

“That said, he clearly disobeyed Officer Goodman and other officers, and he did position himself near the front of a mob as he ran up the stairs toward Officer Goodman,” the judge said. ”That may be some leadership, but only in the narrowest sense.”

Kelly noted that a video captured Jensen referring to the Capitol building as the White House. The judge said he didn’t believe that Jensen could have coordinated with others or planned an attack in advance “when he had no basic understanding of where he even was that day.”

Prosecutors said Jensen’s history, including being a self-described adherent of the QAnon conspiracy theory, weighed in favor of continued detention.

“Defendant’s eagerness to travel more than 1,000 miles in hopes that he would hear [then-]President [Donald] Trump declare martial law, and his willingness to take martial law into his own hands when no such pronouncement came, says more about Defendant’s characteristics than any criminal history ever could,” they wrote in a recent motion to keep Jensen detained.

The QAnon movement, which started on 4chan and 8chan message boards with a trickle of clandestine-sounding posts, often centers on the theme of big government plots to curb individual liberties and advance so-called deep state and globalist agendas. It grew into a large underground movement with a number of splinter groups and sometimes claims that members of the world’s social, economic, and political elites have engaged in child sex trafficking, abuse, and cannibalism.

Defense attorney Christopher Davis said his client went to the Capitol to observe what QAnon promoters have prophesized as “The Storm,” the day when Trump’s enemies would be rounded up and executed.

“He was in front of everyone for the now disclosed silly reason to get Q recognized for ‘The Storm’ that was about to take place,” Davis wrote in a court filing.

Jensen’s lawyer said his client “became a victim of numerous conspiracy theories that were being fed to him over the internet by a number of very clever people, who were uniquely equipped with slight, if any, moral or social consciousness.”

“Six months later, languishing in a DC Jail cell, locked down most of the time, he feels deceived, recognizing that he bought into a pack of lies,” Davis wrote.

Jensen was ordered released to the custody of his wife on July 14. He is slated to appear before the court on July 27. Until then, he was ordered to surrender his passport, stay away from Washington except for court hearings, and not possess a firearm or use alcohol or drugs. He is being restricted to home confinement with few exceptions.

Most of the more than 500 people who have been charged for alleged participation in the Capitol breach are free pending trial.

An appeals court earlier this year suggested a federal judge reconsider ordering Lisa Eisenhart and Eric Munchel, a mother and son, held on charges not related to violence and they were ordered released. But the same court last week upheld the pretrial detention of Timothy Hale-Cusanelli, largely based on his past history of using “violent language.”

In another case, QAnon adherent Jacob Chansley, seen in the Capitol shirtless with horns and face paint, was ordered held until trial.