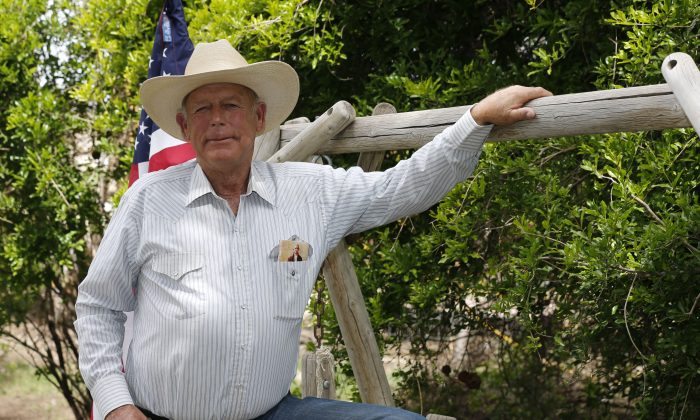 Rancher Cliven Bundy poses for a photo outside his ranch house west of Mesquite, Nev., on April 11, 2014. (George Frey/Getty Images)﻿
US News

A federal judge has affirmed her previous decision to dismiss the case against Cliven Bundy, his two sons, and Ryan Payne for their 2014 armed standoff with federal agents over cattle grazing rights on federal land.

District Judge Gloria Navarro denied the government’s request to retry the case and instead stood by her Dec. 20 ruling of a mistrial.

“The Court finds that the Government has failed to provide the Court with a reason that would warrant reconsideration,” she wrote in her July 3 ruling.

Navarro previously dismissed the case upon finding “that the Government willfully failed to disclose potentially exculpatory, favorable and material information” to the defense—a so-called Brady violation.

Bundy, 71; his sons Ammon, 45, and Ryan, 42; and Payne, 34, were charged in March 2016 with conspiracy and other offenses because they allegedly “planned, organized, led, and/or [participated] as gunmen in the assault, all in order to threaten, intimidate, and extort the officers into abandoning approximately 400 head of cattle that were in their lawful care and custody.”

The 2014 armed standoff was the result of a decades-old dispute over grazing rights. Bundy refused to sell his grazing rights in Bunkerville, Nevada, in 1993, after the federal government included the land in hundreds of thousands of acres designated for conservation of the desert tortoise, The Washington Post reported.

Refusing to pay fines for using the land and getting his permit revoked, Bundy declared defense against a federal land grab and continued to graze cattle on the land.

On April 5, 2014, Bureau of Land Management (BLM) officials rounded-up cattle they found on the disputed land. After six days of armed resistance from Bundy and his associates, federal agents backed down and returned the cattle they had seized.

One of six Brady violations the judge acknowledged concerned a 2012 FBI Behavioral Analysis Unit assessment, which concluded there was a “low to moderate risk of violence” by Cliven Bundy and that the BLM was “trying to provoke a conflict,” The Oregonian reported.