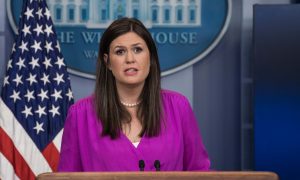 A federal judge ordered the White House on Sept. 3 to restore the press pass of a reporter who yelled at and heckled guests of President Donald Trump, at one point making a bizarre reference to demonic possession.

Video footage recorded by attendees, including Jim Hanson of Security Studies Group, showed Playboy reporter Brian Karem, 58, telling some of the people Trump invited to his social media summit and a subsequent announcement on citizenship on July 11, “This is a group of people who are eager for demonic possession.”

Karem engaged in a back-and-forth with former White House aide Sebastian Gorka, at one point, telling him in a threatening manner: “We can go outside and have a long conversation.” The White House suspended Karem’s press pass on Aug. 2 because of the threats.

U.S. District Judge Rudolph Contreras, an Obama appointee who serves as a judge on the Foreign Intelligence Surveillance Court, said in a ruling on Sept. 3 that the White House can’t deprive reporters of their First Amendment rights without due process.

Contreras wrote (pdf) that Karem’s “demonic possession” comment was “apparently a joke” before recounting Karem’s clash with Gorka, which included the reporter telling Gorka, who hails from Hungary, to “go home.” Karem also exited the designated area for press, causing a Secret Service agent to intervene.

In a letter to Karem from White House press secretary Stephanie Grisham, she said the White House “had not previously thought that a set of explicit rules was necessary to govern behavior by members of the press at White House press events” but that his actions weren’t professional and were disruptive.

“Members of the press, at all times at White House press events, must act professionally, maintain decorum and order, and obey instructions from White House staff, and (2) disruptive behavior that interferes with the conduct of a press event or is otherwise a breach of professional decorum—including but not limited to taunting other members of the press, White House officials, or guests in an effort to provoke a confrontation—is prohibited,” she wrote.

The letter gave Karem a one-day deadline to submit any material or thoughts he wanted Grisham to consider. Karem responded, disputing what happened during the event. His counsel asked Grisham for a meeting to discuss what happened before she made a final decision. While Grisham agreed and met with Karem’s lawyers, he himself declined to attend. She also allowed Karem to submit a written version of his story.

On Aug. 16, a week later, Grisham sent Karem a letter saying she had decided to suspend his hard press pass for 30 days because of his actions at the event. She said Karem’s “demonic possession” remark couldn’t “credibly be understood as mere light-hearted comedy” because it “denigrated the mental state of the gathered audience.”

She also noted that, based on Karem’s demeanor and the reactions of those around him, his invitation to “go outside and have a long conversation” was “an invitation to a physical altercation.”

Karem sued the White House and Grisham on Aug. 20.

According to Contreras, Karem would likely succeed in his suit in his claims that there was no due process to the pass suspension and that the suspension affects his First Amendment rights.

Karem claimed in his suit that the suspension was an act intended to punish him and that government acts intended to punish are subject to exacting scrutiny, to ensure that regulated parties are provided fair notice in a manner consistent with due process. He also cited a previous court decision that said there should be an “explicit and meaningful standard” for regulating hard passes and that the rules Grisham stated, which she said were “widely agreed on” by press and the administration, don’t count.

Karem also argued that the White House press corps has repeatedly acted unruly, interrupting the president and berating press secretaries, so he shouldn’t be singled out for his behavior.

He also said he would suffer irreparable harm if the court didn’t grant a preliminary injunction, because he wouldn’t be able to perform his duties as a White House correspondent.

“Karem has, at this early stage of the proceedings, shown that he is likely to succeed on this due process claim, because the present record indicates that Grisham failed to provide fair notice of the fact that a hard pass could be suspended under these circumstances,” Contreras wrote in his ruling.

“Meanwhile, Karem has shown that even the temporary suspension of his pass inflicts irreparable harm on his First Amendment rights. The Court therefore grants Karem’s motion for a preliminary injunction and orders that his hard pass be restored while this lawsuit is ongoing.”