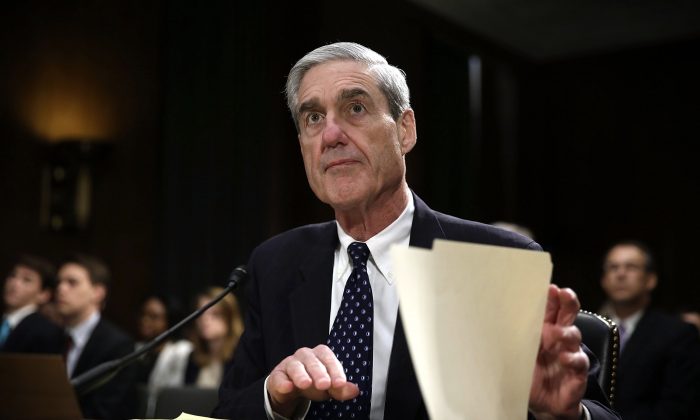 Then-FBI Director Robert Mueller waits for the beginning of a hearing before the Senate Judiciary Committee on Capitol Hill in Washington, on Jun. 19, 2013. (Alex Wong/Getty Images)
Trump Presidency

Flynn pleaded guilty to lying to the FBI during questioning. In his sentencing memorandum, he cited two internal FBI documents that raised questions about the unusual circumstances of the interview and prompted the judge to demand that Flynn submit the documents. The judge, Emmet Sullivan of the U.S. District Court in Washington, went further and asked Mueller to submit any such documents relevant to the FBI interview.

Sullivan gave the government until Dec. 14 at 3 p.m. to submit the documents. The Mueller team only filed the two documents cited by Flynn and both with significant redactions.

According to Flynn’s sentencing memo filed Dec. 11, the FBI’s interview with him on Jan. 24, 2017 was all but commonplace.

First, he got a call from then-Deputy FBI director Andrew McCabe, who advised him it would be “quickest” if he did not have anyone, not even a legal counsel present during the interview, otherwise McCabe would have needed to “involve the Department of Justice.”

McCabe’s suggestion was “indicative of duplicitous behavior,” according to former FBI agent Marc Ruskin who contributes to The Epoch Times.

“To essentially tell someone that they’re better off not having an attorney is a lie,” Ruskin said. “Obviously, it’s not in anybody’s interest to be interviewed by the FBI without an attorney present.”

Flynn quoted McCabe from his own memo dated Jan. 24, 2017. In a lawsuit, each party can request evidence relevant to the case from the other party. Flynn apparently obtained documents from the government and cleared with the prosecution that his sentencing memo can use parts of McCabe’s memo as well as a report, FBI form FD-302, from a July 19, 2017, interview Mueller’s  office conducted with Strzok.

In the texts, Strzok and Page expressed strong animus against then candidate and now incumbent President Donald Trump. One text from Strzok even implied an intent to use his government powers to hurt Trump’s chances of becoming president, according to a June report by the Justice Department’s Inspector General.

Strzok was the leading agent on the FBI counterintelligence probe into several Trump campaign associates and whether they were aiding Russian government’s meddling into the 2016 U.S. presidential election.

Mueller was appointed in 2017 to take over the probe, but has yet to substantiate the allegation. Strzok was fired on Aug. 10.

Some of the Strzok-Page texts (pdf) seems to mention the 302 from the interview with Flynn.

Unless new documents trigger a major shakeup of the case, Flynn can expect a lenient sentence. The prosecutors request the “low end of the guideline range,” including no prison term, while Flynn’s lawyers asked for a year of probation at most and community service.

Update: The report has been updated to reflect information from court documents filed on Dec. 14.