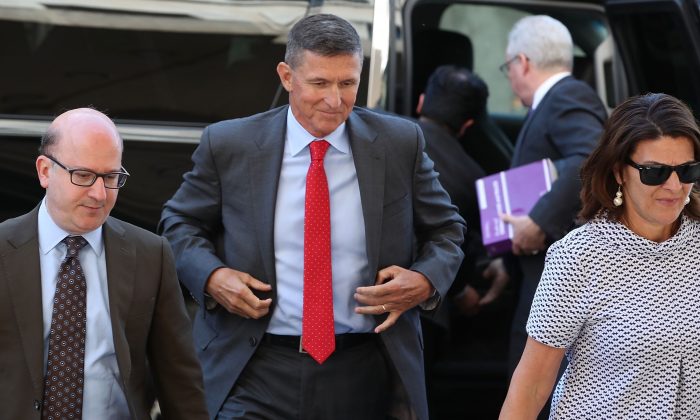 Lt. Gen. Michael Flynn is requesting no more than a year of probation and community service for his confessed crime of lying to the FBI, according to his sentencing memorandum filed Dec. 11.

The memo details the unusual circumstances of the FBI interview that led to the charge against Flynn, including that it was suggested to not have a lawyer present and that he wasn’t instructed that lying to the FBI is a federal offense.

The memo indicated the FBI agents officially filed a report on the contents of the interview seven months after questioning Flynn—a “virtually unprecedented” violation of internal policies, said Marc Ruskin, a 27-year veteran of the FBI and a contributor to The Epoch Times.

Court documents filed on Dec. 14, however, showed the Flynn memo cited a report from an interview the office of Special Counsel Robert Mueller conducted with one of the agents, Peter Strzok, on July 19, 2017, and not a report from the Flynn interview.

No Lawyer, No Warning

The charge against Flynn stems from a Jan. 24, 2017, FBI interview. That day, Flynn was in the White House, serving as a national security adviser to a newly inaugurated President Donald Trump. At 12:35 p.m., Flynn received a call on a secure phone from then-FBI Deputy Director Andrew McCabe. After a chat about a security training, McCabe said he “felt that we needed to have two of our agents sit down” with Flynn to discuss his communications with Russian representatives.

As part of Trump’s transition team, Flynn was tasked with contacting foreign dignitaries and laying the groundwork for the new administration. That included several calls with the Russian ambassador to the United States, Sergey Kislyak.

McCabe, who was, at the time, deeply involved in the FBI probe into allegations of collusion between the Trump team and Russia, suggested to Flynn that he not have a lawyer present for the interview.

“I explained that I thought the quickest way to get this done was to have a conversation between [Flynn] and the agents only,” McCabe wrote in a Jan. 24, 2017, memo cited by Flynn’s memo. “I further stated that if LTG Flynn wished to include anyone else in the meeting, like the White House Counsel for instance, that I would need to involve the Department of Justice. [Flynn] stated that this would not be necessary and agreed to meet with the agents without any additional participants.”

Less than two hours after McCabe’s call, two FBI agents arrived at the White House. One was FBI Deputy Assistant Director Peter Strzok, the other has been implied by Congress investigators (pdf) to be Joe Pientka.

Flynn was “relaxed and jocular” with the agents, “unguarded” during the interview, and “clearly saw the FBI agents as allies,” according to a report, an FD-302 form, from the July interview with Strzok—nearly six months after the Flynn interview.

McCabe and other FBI officials “decided the agents would not warn Flynn that it was a crime to lie during an FBI interview because they wanted Flynn to be relaxed, and they were concerned that giving the warnings might adversely affect the rapport,” the Strzok 302 reads.

The approach to the Flynn interview contrasts with the FBI’s questioning of former Trump aide George Papadopoulos just three days later. Agents not only advised Papadopoulos that lying to them “is a federal offense,” but also reinterviewed him later, giving him a chance to correct the record. Papadopoulos eventually pleaded guilty to lying and was sentenced to two weeks in prison.

In response to the Flynn memo, the prosecutors argued Flynn, a veteran of military intelligence, “undoubtedly was aware … that lying to the FBI carries serious consequences.”

As for legal representation, when former Secretary of State Hillary Clinton was interviewed by the FBI in 2016 regarding her alleged mishandling of classified information, she brought along nine lawyers.

McCabe’s suggestion for Flynn to be alone was “indicative of duplicitous behavior,” Ruskin said.

“To essentially tell someone that they’re better off not having an attorney is a lie,” he said. “Obviously, it’s not in anybody’s interest to be interviewed by the FBI without an attorney present.”

Strzok and Pientka asked Flynn about his contacts with Kislyak. Flynn, former head of the Defense Intelligence Agency and one of the nation’s foremost intelligence professionals, would have been likely to know that phone calls of the Russian envoy are monitored and that the agents could have the transcripts at hand.

Still, he lied to the agents about two requests he made to Kislyak: For Russia to not escalate the situation after then-President Barack Obama imposed additional sanctions on Russia; and for Moscow to vote against or delay the vote on Egypt’s resolution to the U.N. Security Council regarding Israeli settlements in the West Bank and East Jerusalem. The first request partially succeeded—Russia delayed retaliation to the sanctions for several months. The second request failed.

Excerpts from the 302 form indicate that Strzok and Pientka had an understanding that they wouldn’t let Flynn know if they realized he wasn’t forthright.

“Before the interview, FBI officials had decided that, if ‘Flynn said he did not remember something they knew he said, they would use the exact words Flynn used, … to try to refresh his recollection. If Flynn still would not confirm what he said, … they would not confront him or talk him through it,’” Flynn’s memo quoted the form.

Flynn’s case stands in stark contrast to the situation of McCabe himself, who was fired from the FBI for repeatedly lying to internal investigators.

Unlike Flynn, McCabe was interviewed twice, both times under oath, was asked on two occasions whether he needed to clarify or change anything, and was never charged with making false official statements.

According to the prosecutors, Flynn was also given chances to correct himself during the interview, but was not reinterviewed at a latter date.

Flynn grew up in a military family with eight siblings. He spent 33 years in the Army, including five years in combat in Grenada, Haiti, Iraq, and Afghanistan.

His lawyers submitted 50 letters of support from family, friends, and colleagues, many of whom are high-ranking active or retired military officers. The letters detailed multiple instances in which Flynn saved the lives of others, such as in 1983 during the U.S. invasion of Grenada, where he jumped off a 40-foot cliff and rescued two U.S. servicemen swept out to sea. Several of his military performance reviews, attached to the memo, show that his supervisors held him in high regard.

“The best, most capable Intelligence officer I have ever had the privilege to serve with,” wrote then-Brig. Gen. John Mulholland in Flynn’s 2007 performance review. “Mike Flynn is a rare combination of vision, experience, tactical and technical proficiency, character, and energy.”

At the time, Flynn headed intelligence at the Joint Special Operations Command.

Mulholland, himself a former special forces officer, went as far as calling Flynn “easily the best Intelligence professional of any service serving today.”

“Mike Flynn’s impact on the nation’s War on Terror probably trumps any other single person as his energy and skill at harnessing the Intelligence Community into a focused effort was literally historic,” he wrote.

Flynn’s lawyers requested probation not to exceed one year, with minimal supervision, and 200 hours of community service. They pointed to Flynn’s distinguished military career, exemplary personal life, contrition for his error, and extensive cooperation that he provided to the Justice Department on multiple investigations.

The prosecution against Flynn, led by the office of special counsel Robert Mueller, also called for leniency, recommending “a sentence at the low end of the guideline range—including a sentence that does not impose a term of incarceration.”

Flynn spent nearly 63 hours in meetings with the special counsel’s office and other Justice Department offices, and handed over documents no less than six times. Aside from the Mueller probe, he’s helped with an unspecified criminal investigation and possibly another one or two investigations, according to the significantly redacted government memo on Flynn’s sentencing.