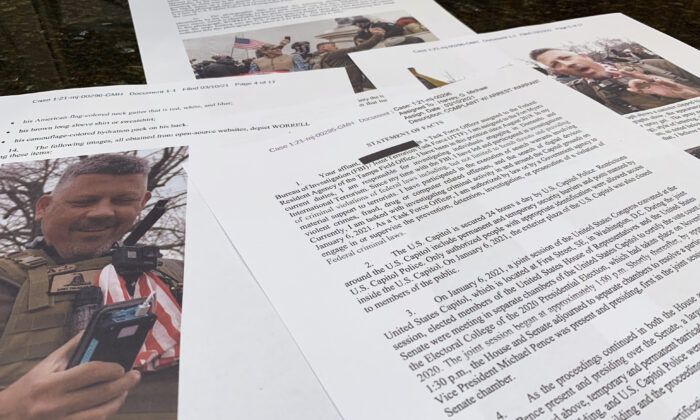 Christopher Worrell is seen in pictures included in the Department of Justice's charging documents in an undated photograph. (Jon Elswick/AP Photo)
Judiciary

Judge Orders Release of Jan. 6 Detainee Because of Problems at DC Jail

A Florida man accused of illegally entering the U.S. Capitol grounds was ordered released by a federal judge this week due to ongoing issues with the Washington jail that was holding him and dozens of other people who allegedly committed crimes on Jan. 6.

Worrell complained that officials at the Washington jail complex, which includes the D.C. Central Detention facility, blocked a recommended operation on his fractured finger and were not giving him access to proper medical treatment for his cancer.

Lamberth last month held Washington jail officials in contempt over the matter and referred the matter and other confirmed and alleges cases of mistreatment of Jan. 6 detainees to the Department of Justice for a potential civil rights investigation.

The agency said this week that Attorney General Merrick Garland received the referral and that a review has been initiated.

In court on Wednesday, Lamberth said Washington officials withheld medical records from the court and other authorities, and that Worrell was mistreated, the American Greatness reported.

Lamberth described the conditions at the lockup as “deplorable,” adding that “This court has zero confidence the defendant will be treated” in the way he needs.

“We are pleased with the court’s order allowing Mr. Worrell to obtain the life-saving cancer treatments he needs,” Alex Stavrou, a lawyer representing Worrell, told The Epoch Times in an email.

“We are also pleased that over 400 inmates will be transferred to facilities where they will receive proper treatment and care, and not be subjected to the deplorable conditions noted by the United States Marshal’s investigation,” he added.

The U.S. Marshals Service conducted an unannounced inspection of the Washington jail system in mid-October, it announced this week. The inspection revealed no conditions that would necessitate the transfer of inmates from the Central Treatment Facility, where Worrell and other Jan. 6 defendants are being held, the service said. But it ordered the transfer of around 400 detainees from another facility in the system after authorities found “conditions there do not meet the minimum standards of confinement.”

Reps. Marjorie Taylor Greene (R-Ga.) and Louie Gohmert (R-Texas) went to the facilities earlier in the week to try to enter to see firsthand the conditions but were denied entry. The pair, along with Reps. Matt Gaetz (R-Fla.) and Paul Gosar (R-Ariz.) later sent a letter to Washington Mayor Muriel Bowser, a Democrat, urging her to let them inspect the facilities.

“It appears that at least some of those treated so vilely for suspected involvement in the January 6 events are political prisoners of the U.S. government,” the lawmakers and Rep. Bob Good (R-Va.) wrote in an Epoch Times op-ed.

Since the Washington officials were found in contempt last month, medical records submitted by both parties showed the doctor who examined Worrell after the fracture recommended hand surgery, but the surgery was repeatedly pushed back.

Jail officials claimed Worrell at one point refused surgery, blaming him for the delays, which prosecutors promoted in arguing against his release.

Prosecutors, though, said they could only relay opinions from doctors treating Worrell and draw conclusions from those. They also said an earlier statement that the D.C. Department of Corrections had always provided in a timely manner Worrell’s medical records was “overbroad” and acknowledged the department had not always done so.

“The government’s position was not unjust in that they argued the law in regard to seeking continued detention, and additionally believed Mr. Worrell’s care to be adequate,” Stavrou told The Epoch Times.

In a separate motion, the lawyer noted that a doctor who initially said Worrell needed hand surgery shifted his position when speaking with prosecutors and U.S. Marshals, alleging the surgery was elective and there was “no urgency” in conducting it.

Jail officials and prosecutors now say the fracture has healed and does not require surgery.

Worrell’s untreated hand causes him pain and ended up deformed, Stavrou said. He wondered why the doctor who recanted was not questioned by the court.

“Mr. Worrell is gravely concerned about his ongoing care from providers who have been found in contempt, investigated for civil rights violations, and whom would have no qualms about misleading this court,” he said in asking for his client’s release.