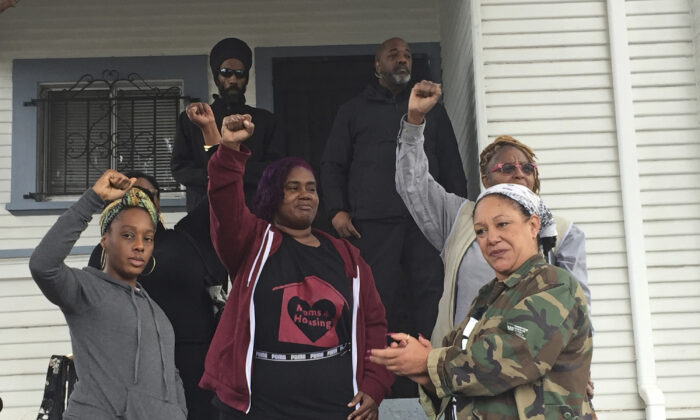 SAN FRANCISCO—Homeless women who are illegally occupying a house in the San Francisco Bay Area don’t have the right to stay and must leave within five days, a judge ruled on Jan. 10.

Still, he allowed lawyers for one of the women, Dominique Walker, and her recently formed collective, Moms 4 Housing, to make their case. They argued that housing is a right and that the court must give the women the right to possess the house, especially because it sat vacant for so long and the alternative would be to send the women to live on the streets.

The judge denied Walker’s request to offer expert testimony on the right to housing through federal and international law.

“The court recognizes the importance of these issues but, as raised in connection with Ms. Walker’s claim of right to possession, finds that they are outside the scope of this proceeding,” McKinney wrote.

The case reflects California’s severe housing shortage and growing numbers of homeless people. Federal officials said in December that an uptick in the country’s homeless population was driven entirely by a 16 percent increase in California, where the median sales price of a home is $500,000 and is even higher in the Bay Area.

The women and their children moved into the three-bedroom house in November, partly to protest the methods of speculators, who they say snap up distressed homes and leave them empty despite the housing crisis.

“Wedgewood takes no pleasure in having the sheriff enforce the court’s order to evict the squatters,” company spokesman Sam Singer said in a statement. “The solution to Oakland’s housing crisis is not the redistribution of citizens’ homes through illegal break-ins and seizures by squatters.”

The women weren’t surprised by the ruling but have no plans to leave the house, their lawyer said.

“We understand that the court’s hands are tied because in this country, property rights are valued over human rights,” said Leah Simon-Weisberg, an attorney from the Alliance of Californians for Community Empowerment, which is helping the women in court.

If they won’t leave voluntarily, sheriff’s deputies would force them out within five days.

Walker, 34, who has 1- and 5-year-old daughters, said she moved back to her native Oakland from Mississippi in 2019, but could not find a place to live in the pricey market. She said many of the people who used to live in her neighborhood have been forced out by rising prices.

“Housing is a human right. I pay bills there. I pay water, PG&E, internet. We live there,” Walker said. “We want to purchase the home … it needs to belong back in the hands of the community. It was stolen through the foreclosure crisis.”

Wedgewood purchased the home for $501,000 and took possession days after the women moved in, Singer said. The 1908 house has one bathroom and is about 1,500 square feet (139 square meters).