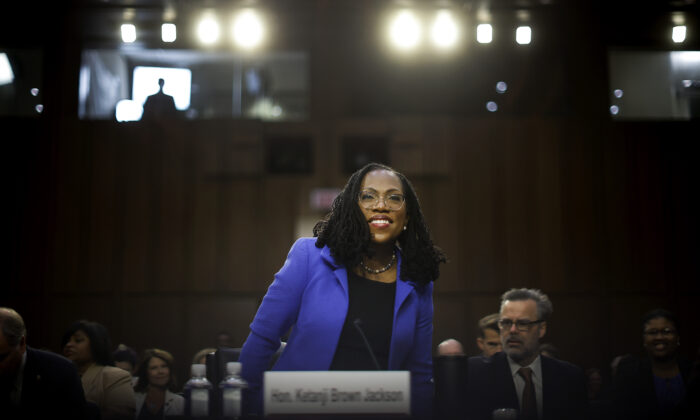 That President Joe Biden nominated Judge Ketanji Brown Jackson to the Supreme Court, fulfilling his promise to put a black woman up for a seat on the bench, yet Judge Jackson pled the Fifth and then ignorance when asked in confirmation hearings to define one of Biden’s two prerequisites—what a woman is—will forever live in infamy in the annals of Court history.

Perhaps the most consequential element of the stunning exchange between Sen. Marsha Blackburn (R-Tenn.) and Judge Jackson, in which Sen. Blackburn asked the judge to “provide a definition of the word ‘woman’,” eliciting a reply from Judge Jackson of “No, I can’t,” is to be found in its transparent—and purposeful—dishonesty.

It isn’t that Judge Jackson “can’t” define “woman”—something that, to put it lightly, strains all credulity, and would disqualify her in a sane world—but that she wouldn’t define what a woman is.

Because to assume one of the nine most powerful positions in the nation, after president of the United States, in which she would be tasked with deciding the most crucial questions of public policy, on behalf of a party representing roughly half of voters, requires Judge Jackson’s silence on the most basic facts of human nature.

Because the coterie of progressive groups backing Judge Jackson, and the progressive Democrat Party that has elevated her to such rarefied heights, would have been apoplectic had she recognized the actual science.

Because to proffer the kind of answer Judge Jackson’s proponents would have craved would be to expose to the entire country the utterly insane, perverse, and detrimental views on sex they have sought to mainstream, provoking a backlash that would echo far beyond the midterms.

The evasiveness is the point.

Better only to inflame the Senate minority’s constituents—a Senate minority that by all appearances will not fight her nomination with the same tenacity as her backers, they of “Borking,” “high-tech lynching,” and the “Kavanaugh caper.”

That “I’m not a biologist” was the best Judge Jackson could muster when pressed by Sen. Blackburn speaks volumes not only about a woman poised to sit on the highest court in the land for decades, and the administration that tabbed her, but the hallowed institutions from which she comes, and the ruling elite who control them.

In a time of deathly serious challenges, we have a Ruling Class uniquely unserious about preserving the civilization from which it has so richly benefitted, and therefore ill-equipped to grapple with what’s facing it.

In fact it’s worse than that. We have a Ruling Class that is actively undermining the very pillars of that civilization, while pursuing those who call out its daily depredations as domestic terrorists.

Their destruction begins with rejecting things we know to be true, or at minimum coercing people into telling lies, and if all else fails, silencing them. It ends with societal collapse.

And among the most basic and fundamental truths is that we are born men and women, each with unique and distinctive characteristics. Human life begins there.

Judge Jackson’s non-response should be seen as an inadvertent endorsement of the progressives’ radical sexual ideology which denies this; celebrating the likes of a Lia Thomas or a Rachel Levine, while deplatforming the people and publications who dare to refer to them by their sex.

This denial is a precursor to the progressives’ rejection of the nuclear family. Kill the nuclear family—and indeed we have seen the decline of the family, and relatedly that of faith in G-d, and love of country—and you kill the country.

Supplant the nuclear family with a series of socializing institutions that propagate the regime’s ideology—an ideology to which, based on her scholarship and rhetoric, Judge Jackson obviously subscribes—and you hasten its death.

One need not go any further into Judge Jackson’s dubious record, particularly the apparent soft-on-crime approach she’s taken to the most heinous of crimes and criminals, including sexual ones, and the nexus to the leftist ideologues whose work she has touted—issues on which she’s been similarly evasive—to see her for the disastrous justice she will be.

Judges like Ketanji Brown Jackson are a feature, not a bug, of our brave new post-modern, arguably pre-civilizational world, brought to you by our Ruling Class.

We will all suffer the consequences. That is an inescapable truth you won’t need a biologist to confirm.