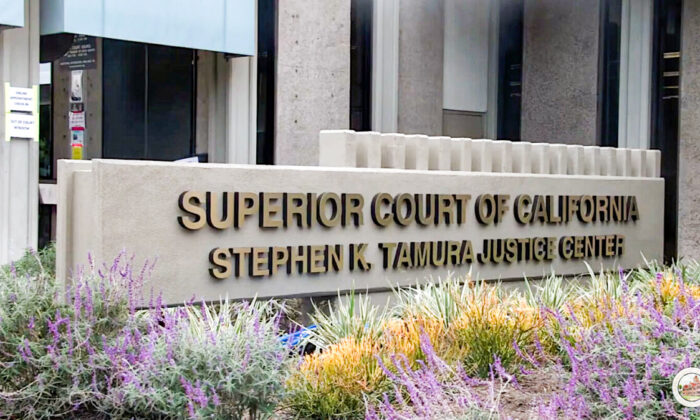 The new name for the Orange County Superior Court's West Justice Center is revealed in a livestreamed ceremony in Westminster, Calif., on Nov. 6, 2020. (Screenshot via Superior Court of California County of Orange)
Southern California OC News

ORANGE, Calif.—An Orange County Superior Court judge extended a temporary restraining order Aug. 18 against a Mission Viejo dermatologist from seeing or phoning her children in light of allegations that she poisoned her husband with Drano.

Judge Thomas Lo maintained a temporary restraining order against Dr. Yue “Emily” Yu and scheduled the next hearing in the custody and divorce case for Sept. 16.

Until then, Yu won’t be able to visit or phone her children, a son who is 7 and a daughter, who is 8. Both have birthdays at the end of the month.

Attorneys for Yu said videos her husband, Dr. Jack Chen, have that led Irvine police to arrest Yu for allegedly poisoning Chen with Drano was “fabricated.”

Attorney Steven Hittelman, who represents Chen, told reporters following Thursday’s hearing that, “Nothing could be further from the truth.” He said that once Yu’s attorneys eventually see the three videos, “Hopefully, the attitudes we’ve been seeing will change.”

Chen, a 53-year-old radiologist, filed a restraining order against his 45-year-old wife, Yu, earlier this month.

Yu, who was arrested by Irvine police on suspicion of attempting to poison her husband, was released from jail after posting $30,000 bail. Chen said she called him to post bail but he refused, according to the restraining order.

“It’s on video and it’s very clear,” Hittelman said of the alleged dosing of the clog-cleaner in Chen’s drinks.

Chen recorded three videos amounting to a total of 90 minutes, Hittelman said. He said he has viewed about half of the footage.

“The videos are quite clear what she was doing,” Hittelman said.

When Lo said he would not allow visitation for Yu, her attorneys asked for at least some sort of Zoom or FaceTime call and the judge also denied that.

Defense attorney David Wohl, who represents Yu, told reporters that “this case is full of false allegations to gain an advantage in a custody battle.”

“The father doesn’t want a mother to see her own children,” Wohl said.

Wohl said his client was pouring Drano into a smaller cup to use to clear out pipes as anyone else would.

Wohl also questioned why Chen hasn’t turned over the video to his wife yet.

“Why is he refusing to turn it over to us,” Wohl said.

Chen’s attorneys have said police asked them not to share the evidence, but Wohl said that shouldn’t matter in the family law case. At some point, the video will have to be turned over to Yu so the divorce and custody hearings can continue, Wohl said.

Yu’s attorney has received an outpouring of messages from the doctor’s clients and colleagues, “Saying they know she could never” do what she is accused of doing, Wohl said.

“She did nothing wrong. She did not commit a crime,” Wohl said.

Wohl argued that Chen may have been ill for some other reason and even suggested he ingested the pipe cleaner to buttress the allegations against his wife.

Prosecutors have not yet decided whether to file a case.

In the restraining order applications, Chen said he is “fearful” of living in the same Irvine home with Yu “due to [Yu’s] attempts to poison me with Drano.”

Chen also alleged that “both children have suffered physical, verbal and emotional abuse by their mother … and their maternal grandmother.”

Wohl has accused Chen of being abusive in the relationship.

Chen said that in March and April he “started noticing a chemical taste in my lemonade” and that soon after that he “developed symptoms that had me see the doctor, who performed an examination and diagnosed me with two stomach ulcers, gastritis, and esophagitis.”

That prompted Chen to set up surveillance video in the kitchen, and he attached videos and photos that he alleged show his wife pouring Drano into his drinks.

“After the children were born, I became concerned about Emily’s behavior,” Chen said. “Not only was she very demanding of me that I give her massages—one time when I could not because I was sick she stepped on my head until I did—she also began hiding money from me.”

He said his wife’s “parenting—if you could call it that—revolves around yelling, insulting, verbally abusing, hitting, pushing, pulling and being emotionally abusive.”

He said if the two children said they enjoyed spending time with him, she would “put them in their room and yell at them until they assured her they would not show affection toward me.”

He also accused her of “sleep deprivation” punishment at times.