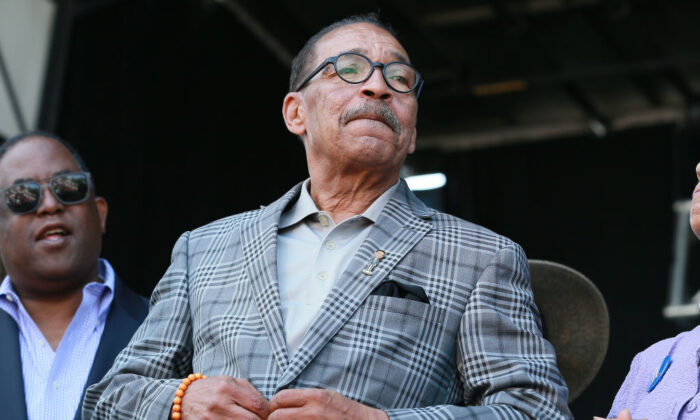 Herb Wesson attends the official unveiling of City Of Los Angeles's Obama Boulevard in honor of the 44th President of the United States of America in Los Angeles, Calif., on May 04, 2019. (Leon Bennett/Getty Images)
Southern California

Los Angeles Superior Court Judge Mitchell L. Beckloff had issued a tentative ruling on Aug. 17 stating that he was inclined to issue the injunction, but after hearing arguments the same day he took the matter under submission before issuing a 10-page ruling Monday.

A nonjury trial of the case remains scheduled for Oct. 19.

The Southern Christian Leadership Conference of Southern California has challenged the legality of Wesson’s appointment as a temporary replacement for Ridley-Thomas, saying he is termed out due to his previous time on the council. Wesson represented the 10th District from 2005 through 2020, serving as council president from 2012 to 2020. The group also challenged the legality of the council’s suspension of Ridley-Thomas, but the judge said he concluded the council did have such authority.

The conference’s attorney John Sweeney said outside the courtroom after Wednesday that the right of 10th District residents to have a say in who represents them overrides concerns about a temporary lapse in having someone fill the seat, and that decisions Wesson may make in the interim could affect the district indefinitely.

Ridley-Thomas—a former executive director of the conference—was suspended from the council last October, following his federal indictment on corruption charges.

The motion to appoint Wesson as a temporary replacement was unanimously approved by the council on Feb. 22.

Wesson is supposed to hold the position through Dec. 31 unless Ridley-Thomas is acquitted or the charges against him are dropped. Deputy City Attorney Jonathan Eisenman argued the appointment does not run afoul of term-limit rules because Wesson would serve less than half of the remainder of Ridley-Thomas’s term.

In February, a different judge, Mary H. Strobel, issued a temporary restraining order barring Wesson from serving on the council. But she later vacated that order and declined to issue a preliminary injunction, saying that procedurally, the conference needed to obtain permission from the state Attorney General’s Office to proceed with its legal challenge.

As a result, Wesson began serving on the council in mid-March. In June, however, the Attorney General’s Office cleared the way for the conference to proceed with its challenge, opining that there were legitimate questions about whether Wesson’s appointment was legal.

Last month, Strobel issued another temporary restraining order, barring Wesson from performing any council duties, although not specifically removing him from the office. Earlier this month, Strobel recused herself from the case, saying she worked on a city commission in 1999 that recommended changes to the City Charter—changes that are being referenced in the city’s opposition to the conference’s challenge to Wesson’s appointment.

That led to the case being transferred to Beckloff, who held his first hearing on the matter Wednesday.

Ridley-Thomas and Marilyn Flynn, former dean of the University of Southern California School of Social Work, are charged in a 20-count indictment alleging a secret deal in which Ridley-Thomas—when he was a member of the county Board of Supervisors—agreed to steer county money to the university in return for admitting his son, Sebastian Ridley-Thomas, into graduate school with a full-tuition scholarship and a paid professorship.

Flynn allegedly arranged to funnel a $100,000 donation from Ridley-Thomas’s campaign funds through the university to a nonprofit to be operated by his son, a former assemblyman. The donation prompted an investigation by the U.S. Attorney’s Office in Los Angeles that remains open, prosecutors said.