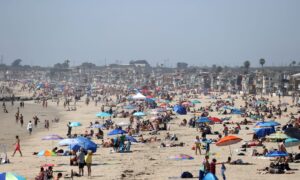 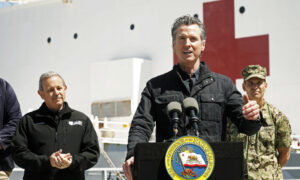 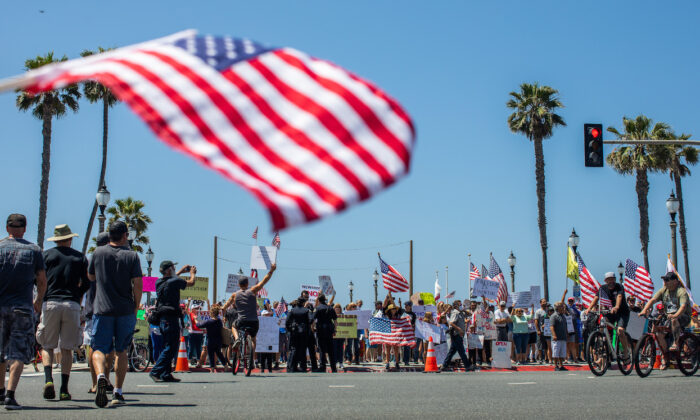 Protesters gather in a demonstration in Huntington Beach, Calif., on May 1, 2020. (Apu Gomes/Getty Images)
AMERICA

A judge on May 1 rejected a request to block California Gov. Gavin Newsom’s order to temporarily close all beaches and parks in Orange County.

The cities of Huntington Beach and Dana Point are pursuing legal action against the state after Newsom on April 30 issued the order to close Orange County’s beaches, effective May 1.

“The governor is acting without constitutional or statutory authority and is infringing on the cities’ right to control their own beaches,” according to a document filed in Superior Court, the Los Angeles Times reported. Meanwhile, nearby Newport Beach expressed its support.

California Superior Court Judge Nathan R. Scott’s decision not to block Newsom’s order means that Orange County beaches will stay closed for now. The judge set a hearing for May 11 to give Huntington Beach an opportunity to make its case.

“It’s a difficult task. [Temporary restraining orders] are hard to get but it is the first step in the process,” Huntington Beach City Attorney Michael Gates said after the May 1 hearing, the Los Angeles Times reported.

“Given that Orange County has among the lowest per-capita COVID-19 death rates in California, the action by the state prioritizes politics over data, in direct contradiction of the governor’s stated goal to allow science and facts to guide our response to this horrible global pandemic,” she said.

“Our experience locally had been that most people were being responsible and complying with social distancing requirements.”

The Huntington Beach City Council in an emergency meeting had voted 5–2 on April 30 to direct the City Attorney to seek an injunction against Newsom’s order. Meanwhile, about 30 miles south, Dana Point City Council voted 4–1 to seek a temporary restraining order against Newsom and the state of California over the shutdown order, according to Dana Point City Attorney Patrick Munoz.

“The city will be seeking a temporary restraining order asking the court to enjoin [Newsom’s] order until a full hearing on the merits of the matter can occur,” Munoz told CNN.

At a press conference on April 30, Newsom described his order as a “hard close” in the Orange County area, noting that “specific issues on some of those beaches [in Orange County] have raised alarm bells.”

He had earlier reacted to images showing people at some Orange County beaches—most notably Newport Beach—gathering in crowds over the last weekend.

“The reality is we are just a few weeks away, not months away, from making measurable and meaningful changes to our stay-at-home order,” the governor said at a press briefing on April 27, referring to his statewide mandate issued on March 19.

There are about 2,537 people in Orange County who have been infected with the CCP virus, also known as the novel coronavirus, 50 of whom have died, according to the county’s public health department.