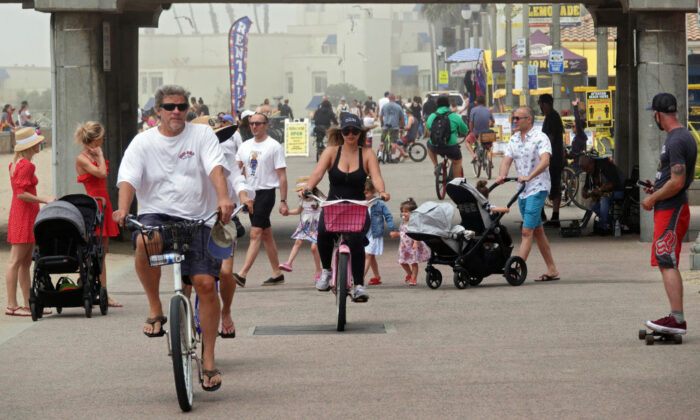 People ride bikes and walk on a path along the beach in Huntington Beach, Calif., on April 26, 2020. (Michael Heiman/Getty Images)
By City News Service

NEWPORT BEACH (CNS)—Despite indications he might close the coastline statewide, Gov. Gavin Newsom on April 30 instead ordered a temporary “hard close” only of beaches in Orange County, where crowds gathered on the sand during last weekend’s heat wave amid social-distancing mandates due to the CCP virus.

On April 27, Newsom lamented images of crowds that gathered on some beaches in Orange County—particularly in Newport Beach—on the weekend of April 25-26, saying such masses of people are a feeding ground for COVID-19 and could reverse the progress the state has made in “flattening the curve” of the illness.

He repeated those concerns on April 30, but said the “vast majority” of the state did not have issues with large crowds gathering.

“I’ve been led by my health directors … that feel we need to address that a little more specifically in a targeted way. The volume of people in a concentrated space, particularly in a few cities, in a few coastal cities, off and around the Orange County area. Those were the point of particular concerns.

“So today we want to make some clarifications. We’re going to do a hard close in that part of the state, just in the Orange County area,” he added.

“We’re going to have a temporary pause on the beaches down there, state and local beaches. We want to work very closely with local elected officials, and we’re committed to doing that,” said Newsom.

But on April 28, the Newport Beach City Council rejected a proposal to shutter the beaches for the next three weekends. Laguna Beach officials, meanwhile, voted to allow active use of the beaches from 6 a.m. to 10 a.m. weekdays, beginning May 4.

“We heard Gov. Newsom’s comments and are awaiting a copy of the actual order,” said John Pope, a spokesman for Newport Beach. “The city of Newport Beach intends to honor the governor’s directive to close Orange County beaches.”

“Gov. Newsom just doesn’t seem to get it,” he said.

“Orange County residents have been responsible. They’ve followed health care officials’ prudent recommendations and respected the science. The county hasn’t seen the ‘surge’ in its hospitals, and six weeks into this shelter-in-place order, the beach may be the best medicine.”

Moorlach added, “We need to trust people. If our citizens exercise proper social distancing, then we should allow access to the beaches.

“If you’re part of a vulnerable group, shame on you for going to the beach. Indeed, we allow shoppers to go to the grocery store with proper social distancing. Why not the beaches?”

Orange County GOP Chairman Fred Whitaker said he was “greatly angered” by the closure of the beaches.

“It is a complete slap in the face to local control, and has nothing to do with health,” he said.

“His [Newsom’s] actions are arrogant and unnecessary. A pandemic does not cancel our constitution, our branches of government, or our right to be governed by those we elected in our local communities.”

On April 29, a memo from the California Police Chiefs Association was circulated to law enforcement agencies across the state, indicating that the governor planned to order the closure of all beaches in the state.

“After the well-publicized media coverage of overcrowded beaches this past weekend, in violation of Governor Newsom’s Shelter in Place Order, the governor will be announcing tomorrow [April 30] that ALL beaches and all state parks in California will be closed, effective Friday, May 1st,” the bulletin read.

“We wanted to give all of our members a heads up about this in order to provide time for you to plan for any situations you might expect as a result, knowing each community has its own dynamics.”

Newsom, however, denied on April 30 that he ever intended to make such a sweeping order.

Orange County Supervisor Don Wagner said Newsom has the power to close beaches in Orange County, but does not believe it is a wise decision.

Wagner called the governor’s decision an “overreaction from the state [that] will undermine that cooperative attitude and our collective efforts to fight the disease, based on the best available medical information.”

Newport Beach police Chief Jon Lewis and fire Chief Jeff Boyles issued a joint statement on the morning of April 30, insisting that when crowds gathered at the city’s beach on the weekend of April 25-26, “the overwhelming majority of Newport Beach residents and visitors were families or practicing social distancing.”

“What we observed from land and by air was the vast majority of beachgoers practicing social distancing,” they said in the statement.

“There were, in places, some clusters of people that were not social distancing. Throughout the day, our police officers and lifeguards patrolled the entire beach area to educate and remind those individuals of the necessity of physical distancing.”

Fearing that Newsom might issue a statewide beach-closure order, San Diego Mayor Kevin Faulconer took to Twitter on the morning of April 30 to criticize such a move.

In San Diego County, beaches are open in San Diego, Oceanside, Encinitas, Coronado, and Imperial Beach. Beaches in Del Mar were set to open on the morning of April 30, but word of Newsom’s pending announcement put the move on hold.

“San Diego beaches will stay open under our plan approved by lifeguards and health officials,” he wrote on Twitter.

“In a time of great crisis we don’t need knee-jerk policies. We need to keep a steady hand. It’s the only way to keep the public’s trust. Keep it up, SD!”

Newsom has been insistent that residents continue adhering to social-distancing requirements, saying in recent days that the state could begin lifting some restrictions in “weeks, not months” if people continue to stay at home. But he said that could change quickly if people get complacent.

He noted that the state recorded a near-record number of deaths from the Chinese Communist Party (CCP) virus on April 29, saying, “It’s just another reminder, this disease has not gone away.”

The latest virus-related fatality raises the county’s death toll to 45, and brings the total number of confirmed cases to 2,393, according to the Orange County Health Care Agency.

The number of hospitalized patients jumped from 175 on April 29 to 190 on April 30, while the number of intensive care patients declined from 70 to 63.