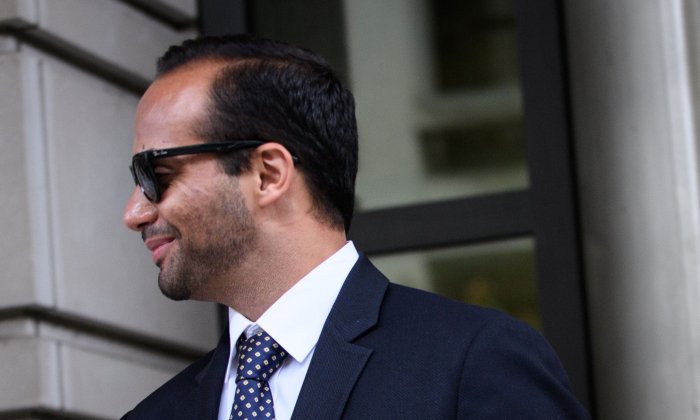 George Papadopoulos leaves the U.S. District Courts after his sentencing in Washington on Sept. 7, 2018. (Mandel Ngan/AFP/Getty Images)
US News

A federal judge denied two motions to delay the prison sentence of George Papadopoulos on Nov. 25, scuttling an 11th-hour attempt to pin the former Trump campaign volunteer’s fate to a decision in a separate case concerning the legality of the appointment of special counsel Robert Mueller.

U.S. District Judge Randolph Moss issued the ruling (pdf) one day before Papadopoulos was scheduled to surrender to prison authorities to serve a 14-day sentence for lying to the FBI.

Papadopoulos filed a pair of motions on Nov. 16 and Nov. 25 to continue his bail and delay his surrender to authorities. In both requests, Papadopoulos argued that a delay is in order pending a decision on the constitutionality of Mueller’s appointment being heard by the D.C. Circuit Court of Appeals.

In the D.C. Circuit case, an appeal argues that Mueller’s appointment violates the Constitution’s Appointments Clause, which requires that principal officers be appointed by the president and confirmed by the Senate. Papadopoulos, who was indicted and prosecuted by Mueller’s team, asserted that a decision in the D.C. case may end up reversing his conviction and sentencing.

The special counsel is investigating allegations of collusion between the Trump campaign and Russia, as well as related matters. Mueller has not charged any American for colluding with Russia.

Moss ruled, in part, that Papadopoulos filed the appeal too late, ridding him of rights afforded under The Bail Reform Act.

“The Court, accordingly, concludes that Papadopoulos has failed to carry his burden of demonstrating that the Court should continue his current bail status pending a decision by the D.C. Circuit,” Moss wrote regarding the motion to continue bail.

Regarding the second motion, the judge pointed out that all of the evidence in the D.C. Circuit case was available to Papadopoulos for months, leaving the defendant with plenty of time to make a motion that would “permit an orderly appeal.”

“Rather than do so, Papadopoulos waited until the eleventh hour to seek relief; indeed, he did not file his second motion—the stay request—until the last business day before he was scheduled to surrender to serve his sentence,” Moss wrote.

Papadopoulos pleaded guilty in October last year to one count of making false statements. In the plea deal, Papadopoulos admitted to lying to the FBI about his contacts with Joseph Mifsud, a Maltese professor who the Mueller team cast as a figure deeply connected to Russian officials. Open-source research indicates that Mifsud has extensive ties to Western intelligence, rather than Russia.

In addition to the 14 days of incarceration, the court sentenced Papadopoulos to serve a year of supervised release and ordered him to serve 200 hours of community service and pay a $9,500 fine.

Papadopoulos did not respond to a request for comment. His wife, Simona Mangiante Papadopoulos, shared a message of support on Twitter.

“If one loves you will never let you down. Mostly in the moments of need. I am there for you [George]. You don’t deserve to go to jail but you will come out stronger. The world will judge ultimately. Love [you],” she wrote.

“This is why I will always be the luckiest guy in the world,” Papadopoulos wrote in reply.

“The truth will all be out. Not even a prison sentence can stop that momentum. Looking forward to testifying publicly shortly after. The wool isn’t going to be pulled over America’s eyes forever,” he added.

After his sentencing, Papadopoulos embarked on a media spree, alleging, in part, that he was the victim on an international conspiracy to shape the 2016 presidential election and undermine Trump. Papadopoulos alleges that British, Australian, and American intelligence services worked to sabotage Trump’s team.

The FBI surveilled Page for one year using a secret court warrant. Top FBI and DOJ officials signed off on the warrant application to surveil Page even though it was based on a dossier of unverified claims compiled by a former British spy. The Clinton campaign and the Democratic National Committee had paid for the dossier through a law firm.