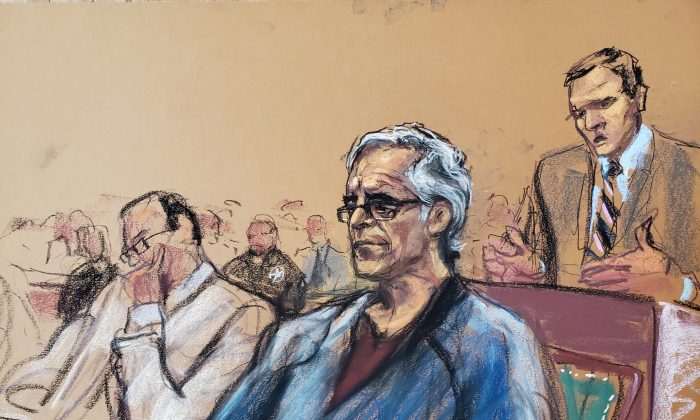 Assistant U.S. Attorney Alex Rossmiller (R) speaks as Jeffrey Epstein looks on during a a bail hearing in this courtroom sketch in New York on July 15, 2019. (REUTERS/Jane Rosenberg)
US News

The decision came days after Berman said he needed more time to make up his mind. Epstein will now remain at the Metropolitan Correctional Center while he awaits trial.

The accused sex trafficker—wearing a navy shirt, glasses, and looking disheveled in appearance—had no visible reaction to the decision. Epstein stared intently at Berman throughout the hearing, which started at 11:30 a.m. after being pushed back from its initial scheduled start at 9:30 a.m.

“The government has established a danger to others and the community by clear and convincing evidence,” Berman said in explaining his decision.

The judge said he rejected Epstein’s proposed bail package and described it as “irretrievably inadequate.” Epstein had requested to stay at his Manhattan mansion under house arrest and with armed guards paid out of his pocket. Epstein also said he was willing to sign a bail bond of $100 million or more.

Epstein claimed to have a net worth of around $559 million, according to a short, one-page summary of his finances that was filed to the court. The summary listed some of Epstein’s properties as assets.

Berman scheduled the next hearing in the case for July 31 at 11 a.m., although he noted that the date could change.

The judge said he would later submit a written opinion explaining his decision to deny bail. He estimated his opinion would be about 30 to 34 pages long.

One of the victims, Annie Farmer, made her case in a trembling voice on July 15. Farmer said Epstein was “inappropriate” with her when she was 16 years old. She argued that Epstein posed an “extraordinary risk of flight” and that he was dangerous.

The other victim, Courtney Wild, told Berman she was sexually abused by Epstein when she was 14 years old in Palm Beach. “He’s a scary person,” Wild said, adding that he shouldn’t be allowed to walk freely in the streets.

Court documents state that Epstein sexually exploited and abused dozens of minor girls at his homes in Manhattan and in Palm Beach, Florida, among other locations.

Geoffrey Berman, U.S. attorney for the Southern District of New York, said at a July 8 press conference that the charges at Epstein’s age, 66 years old, are tantamount to “a life sentence.”

Attorneys previously announced that the FBI was looking for more victims of Epstein to come forward.

Meanwhile, in a letter submitted earlier on July 18, Epstein’s lawyers claimed Epstein’s expired foreign passport was given to him “by a friend.”

The expired passport, found in a locked safe by federal agents next to piles of cash and diamonds, was first brought up by prosecutors during a July 15 bail hearing, The Epoch Times previously reported. The passport had Epstein’s photo but was listed under a different name.

Epstein’s lawyers said he was given the passport because some Jewish Americans were informally advised “to carry identification bearing a non-Jewish name when traveling internationally in case of hijacking.”

“[Epstein] never used the document to travel internationally and never presented it to any immigration or customs authority,” the letter stated. A previous July 16 letter from the defense said the passport was Austrian and expired “32 years ago.”

“The passport stamps, predating his receipt of the document, do not reflect Mr. Epstein’s entries or exits. His expired U.S. passports, seized by the government and in its possession, would verify his true travel,” the July 18 letter stated. It also said Epstein has no other “citizenship or legal permanent residency.”

Prosecutors said in a July 17 letter that the passport contains a number of ingress and egress stamps, “including stamps that reflect use of the passport to enter France, Spain, the United Kingdom, and Saudi Arabia in the 1980s.”