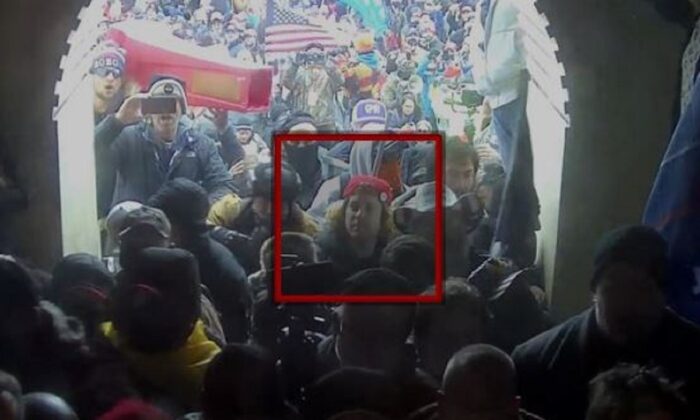 In this image from surveillance vidoe, David Judd is seen outside the U.S. Capitol in Washington on Jan. 6, 2021. (Department of Justice via The Epoch Times)
Jan. 6 Coverage

A federal judge has convicted three men of obstruction of an official proceeding for taking part in the U.S. Capitol breach on Jan. 6, 2021.

Robert Morss of Pennsylvania, Geoffrey Sills of Virginia, and David Judd of Texas were found guilty of obstruction on Aug. 23. All three were also convicted of assaulting, resisting, or impeding law enforcement officers, with Morss and Sills doing so with a dangerous weapon. That pair was also convicted of robbery.

U.S. District Judge Trevor McFadden, a Trump appointee, handed down the verdicts after the defendants chose a bench trial. That means a judge decides innocence or guilt, rather than a jury.

According to court filings, Morss, Sills, and Judd went onto U.S. Capitol grounds during the afternoon of Jan. 6.

Morss removed a bike rack fence that was between officers and the crowd, and joined rioters who pushed officers back outside the Capitol, according to a statement of offense. “Take a look around. We are going to take our Capitol back,” he said at one point.

Sills helped push officers back, hurled objects at the retreating officers, and struck at least two with a baton that he stole from a Metropolitan Police officer.

All three men were part of the group clashing with officers in a tunnel that leads to a Capitol entrance, with Judd lighting what appeared to be a firecracker and throwing it at the police line.

Morss eventually entered the Capitol through a broken window and passed out a chair from an office inside. The other two men were not accused of entering the building.

Before the trial, the defendants entered into agreements with prosecutors whereby they all agreed on certain facts.

Elizabeth Mullin, a lawyer representing Judd, told The Epoch Times in an email that the arrangement had the government telling the judge her client should receive credit for “his acceptance of responsibility” under sentencing guidelines.

“Mr. Judd works two jobs to take care of his mother and grandmother. He is an active participant at his Church and has never been in trouble before. He traveled to the Capitol on January 6 to support then President [Donald] Trump, who invited his supporters to come and who had been telling his supporters that the election had been ‘stolen,'” Mullin said.

“Mr. Judd has admitted that once he was there, after hearing the speakers at the rally urging the rally-goers to ‘fight’ and to march to the Capitol, he got swept up in the frenzy of the crowd and made some serious, dangerous mistakes. He has taken full responsibility for the decisions he made that day and he deeply regrets his conduct. Mr. Judd has nothing but respect for law enforcement and for our democratic process; his conduct that day was truly an aberration,” she added.

While Trump told supporters to go to the Capitol on Jan. 6, he also said they should remain peaceful.

Lawyers for the other two men did not respond to requests for comment.

For the felony convictions, the men face decades in jail. The obstruction charge alone can land an individual up to 20 years in prison.

Maximum sentences are rarely given. A judge will sentence the men after taking into account sentencing guidelines and briefs from prosecutors and the defendants.