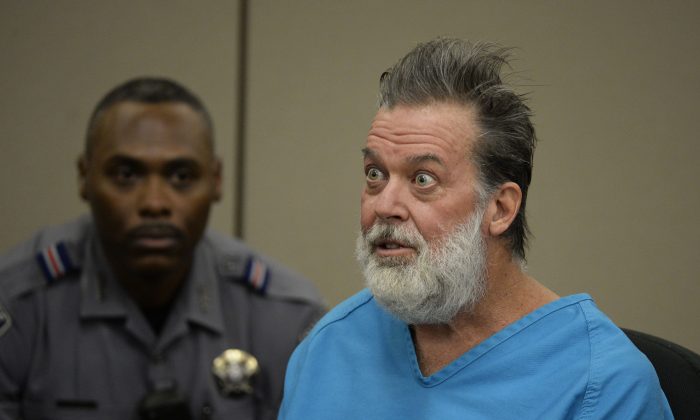 Dear, 58, was found incompetent by court-ordered psychiatric evaluation. Judge Martinez agreed with the assessment on May 11, according to KUSA journalist Anastasiya Bolton live-tweeting the proceedings.

Tensions were high in the Colorado Springs courtroom, Bolton wrote. As Dear was escorted out of the courtroom, he called the judge a “filthy animal.”

Dear will remain in a Pueblo mental health facility and the judge will assess his situation again in three months.

Arrested after a 5-hour stand off with police, Dear said he attacked the clinic “because he was upset with them performing abortions and the selling of baby parts,” according to the arrest report, cited by The Washington Post.

During previous court hearings, Dear refused his public counsel and said he wouldn’t cooperate with the psychiatric evaluation because he was sure he’d be injected with psychotropic drugs.

Dear is charged with first-degree murder and may face a life sentence or the death penalty.

He was described by his ex-wife as a demanding, overly critical, untrusting adulterer who used his interpretation of Christianity to attack others, but didn’t live according to its precepts, according to divorce documents cited by The New York Times.

His mention of “selling of baby parts” likely refers to the Planned Parenthood scandal in 2015, when an anti-abortion group accused Planned Parenthood of selling fetal tissue for profit. Multiple investigations haven’t found any wrongdoing. Two members of a group that made the allegations have been indicted for tampering with federal records.

Breaking: planned parenthood shooter to be treated in pueblo. Judge to assess the situation in 90 days in August #9news

Breaking: planned parenthood shooter calls the judge a ‘filthy animal’ while being escorted out of the courtroom #9news