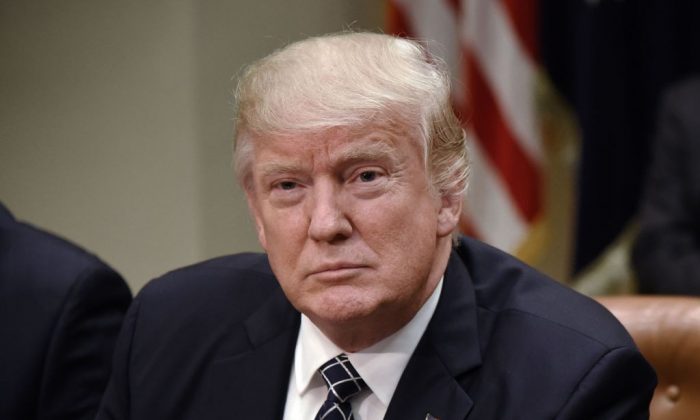 President Donald Trump signs the Executive Order Promoting Agriculture and Rural Prosperity in America during a roundtable with farmers in the Roosevelt Room of the White House in Washington on April 25, 2017. (Olivier Douliery-Pool/Getty Images)
Politics

The ruling from District Judge William Orrick III in San Francisco said Trump’s order targeted broad categories of federal funding for sanctuary governments and that plaintiffs challenging the order were likely to succeed in proving it unconstitutional.

Representatives for the Justice Department were not immediately available for comment.

Sanctuary cities generally offer safe harbor to illegal immigrants and often do not use municipal funds or resources to advance the enforcement of federal immigration laws.

Santa Clara County receives about $1.7 billion in federal and federally dependent funds annually, about 35 percent of its total revenues. The county argued it was owed millions of dollars of federal funding every day and that its budgetary planning process had been thrown into disarray by the order.

In his ruling, Orrick said the language of the order made it clear it sought to withhold funds beyond law enforcement.

“And if there was doubt about the scope of the Order, the President and Attorney General have erased it with their public comments,” Orrick wrote.

The judge cited comments from Trump calling the order “a weapon” to use against jurisdictions that disagree with his immigration policies.