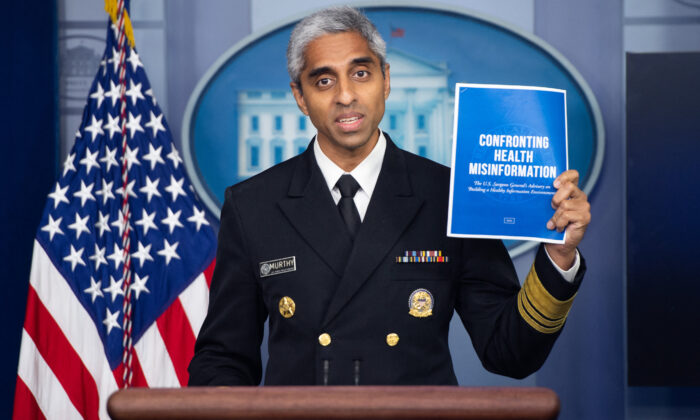 Surgeon General Dr. Vivek H. Murthy speaks during a press briefing in the Brady Briefing Room of the White House in Washington on July 15, 2021. (Saul Loeb/AFP via Getty Images)
By Katabella Roberts

A federal judge on Dec. 7 ruled that three high-ranking officials within the Biden administration will not be required to testify under oath at depositions in a lawsuit that alleges federal government collusion with Big Tech companies to censor users.

The attorneys general claim that high-ranking members of the government colluded and coerced social media companies to “suppress disfavored speakers, viewpoints, and content” or what they claimed was “misinformation” regarding COVID-19.

In November, Doughty, a Trump appointee, also said that Jen Psaki, a former White House press secretary who now works for MSNBC, must also sit for a deposition as part of the case.

However on Thursday, Doughty ruled that three of the individuals—Murthy, Easterly, and Flaherty—will no longer be required to appear for a deposition after a federal appeals court blocked the move last month, stating that the judge had failed to consider whether alternative and less “intrusive” means could be used to obtain the information being sought.

As a result, Doughty said on Thursday that Murthy will no longer be required to appear for a deposition.

The decision came after lawyers for Murthy, who the attorneys general say ran a “public campaign to censor individuals who spread ‘misinformation’ about COVID-19,” had stated there was no need for his deposition.

Instead, lawyers said that written materials provided by Murthy in response to discovery requests would serve as an adequate alternative. Doughty, however, ruled that Murthy’s chief of staff, Eric Waldo, can take the deposition as an alternative.

The depositions were scheduled for early December but Doughty noted on Thursday that this has been extended to Jan. 13, 2023.

Easterly, meanwhile, will also no longer be required to do a deposition after the attorneys general claimed she supervises the “nerve center” of federally directed censorship.

While the court found that Easterly has personal knowledge to be deposed, Doughty said on Thursday that plaintiffs can instead depose their suggested alternative, Brian Scully, an official at CISA.

“Scully is the most suitable alternative for Easterly based on both Federal Defendants’ and Plaintiffs’ arguments,” the judge wrote.

Doughty also said that Flaherty will not need to do a deposition and can instead provide written discovery and “interrogatories.”

Schmitt, who recently won his bid for U.S. Senate, and Landry, who recently announced he’s running for governor in 2023, claim that Flaherty “allegedly holds ongoing meetings about censorship and content modulation with representatives of social media companies.”

“After considering the arguments of Plaintiffs and Federal Defendants, this Court finds that there is no suitable alternative for Flaherty,” Doughty wrote. “However, because written discovery would be less intrusive than a deposition, it is authorized that written discovery be served on Flaherty, such as interrogatories and requests for production of documents, rather than a deposition.”

Plaintiffs can serve Flaherty interrogatories and requests for the production of documents within five days of Doughty’s order and the Biden deputy assistant must provide them with his answers by no later than Jan. 5, 2023.

Doughty noted, however, that if Flaherty’s answers are “vague, evasive, or non-responsive,” Schmitt and Landry will be allowed to resubmit a request for his oral deposition.

Finally, Doughty noted that the court found Psaki had indicated that she had “personal knowledge of high-level White House Officials pressuring social media companies and statements that reinforced threats of adverse legal consequences to social-media platforms if they did not increase censorship of views disfavored by federal officials.”

Psaki has attempted to quash her deposition, claiming that she shouldn’t be “unduly” burdened by having to sit for a deposition, which her lawyers called a “fishing expedition to try to identify additional members of a conspiracy that Plaintiffs have merely alleged to exist.”

Yet Doughty on Thursday ruled that Psaki’s testimony is “crucial for Plaintiffs to identify federal officials who did what Psaki publicly stated they did” and that she must appear for a deposition within the extended expedited preliminary injunction-related discovery period.

The White House has denied claims that it colluded with social media companies to censor free speech on multiple topics, including COVID-19.