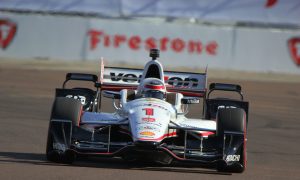 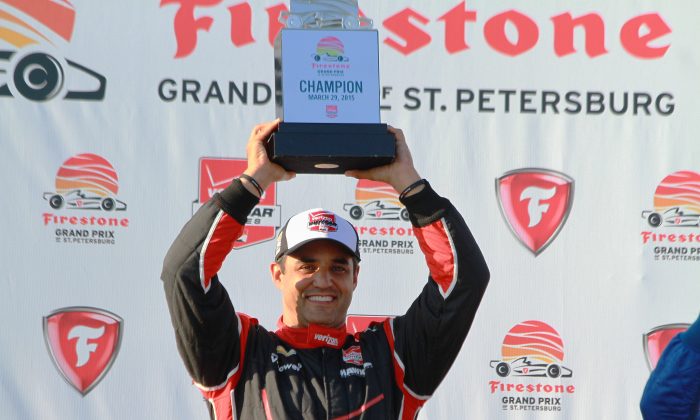 ST. PETERSBURG, Fla.—Penske Racing driver Juan Pablo Montoya started the second season of his IndyCar comeback by fighting off a forceful challenge from team mate Will Power to take victory at the Firestone Grand Prix of St. Petersburg Sunday afternoon.

Will Power, defending race and series champion, started from the pole and led until lap 82 of the 110-lap race. power made his final pit stop on lap 82, a lap later and a second slower than Montoya, who moved into second, and then the lead when another Penske team mate, Helio Castroneves, pitted on lap 82.

Montoya held the lead until the checkered flag waved, despite the best efforts of Will Power, who proved that nobody, not even a team mate, beats him without a fight.

Power pushed hard in the closing laps, finally catching Montoya ten laps from the ed. power tried to squeeze underneath his team mate entering Turn Ten; the pair came together, and power got the worst of it, breaking of one of the aero aids (he calls them “rabbit ears”) protruding from the top of his front wing.

While Montoya continued on his way, taking care to preserve his tires, Power tried to fight through traffic despite having less front downforce. He wasn’t able to catch his team mate in the remaining laps, and had to settle for second.

For Montoya, St. Pete was his second win since returning to IndyCar after seven years in NASACR and a stint in Formula One.

The 39-year-old Colombian came to IndyCar in 1999 and won the series title in his rookie year. In 2000 he won the Indianapolis 500. Having won everything in IndyCar, Montoya departed for F1, where he won the Grand Prix of Monaco and six other Grands Prix before heading to NASCAR in 2006.

Montoya returned to IndyCar in 2014, when he won on the oval at Pocono, but he struggled on street and road courses, which had previously been his forté. His win in St. Pete shows that he has regained his form and is now a likely candidate to contest the series championship.

His win was popular with the crowd, which contained a considerable Colobian contingent. As he took the podium Montoya was greeted with numerous waving Colombian flags and a rough but heartfelt rendition of his home nation’s national anthem.

IndyCar heads to the Big easy for its next event, the inaugural Indy Louisiana on April 12. Tickets are available online.