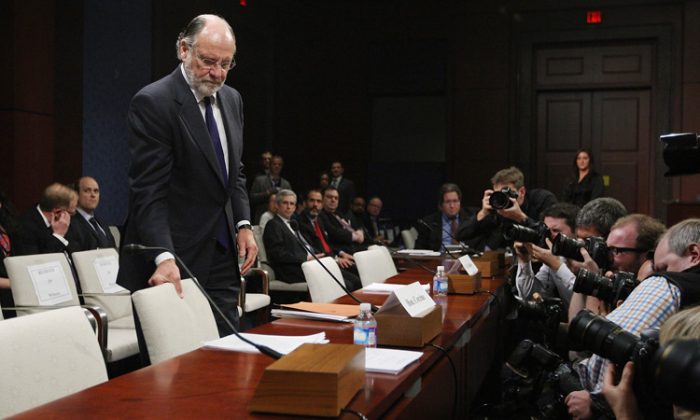 Former chairman and CEO of MF Global and former New Jersey Gov. Jon Corzine takes his seat as he arrives at a hearing before the Oversight and Investigations Subcommittee Dec. 15, 2011, on Capitol Hill. MF Global had made a transfer of cash to JPMorgan, the company’s broker, of around $175 million to cover an overdrawn account on Oct. 28. Last week, it was discovered that this transfer was requested by former CEO Jon S. Corzine. (Alex Wong/Getty Images)
Business

As The Epoch Times reported last week, the focus of the hearing on Wednesday was to obtain more information on a cash transfer MF Global made on Oct. 28, 2011—three days before it filed for bankruptcy—to JPMorgan Chase & Co (JPM).

Industry and federal regulations require brokerage firms to segregate customer accounts from their own accounts, to protect customer funds in the case of bankruptcy. The trustees of the bankrupt MF Global estimated last month that more than $1.6 billion in customer funds are still unaccounted for, and investigations seeking to uncover what had happened during the firm’s last few days is ongoing.

MF Global had made a transfer of cash to JPM, the company’s broker, of around $175 million to cover an overdrawn account on Oct. 28. Last week, it was discovered that this transfer was requested by former CEO Jon S. Corzine, but the cash came from customer accounts. Corzine, in a testimony in December 2011, said that to the best of his knowledge, he did not authorize any transfers from customer funds.

Diane Genova, deputy general counsel at JPM, testified that her firm repeatedly asked MF Global for assurances that the funds were not customer funds.

After JPM received verbal confirmations from MF Global’s staff, the firm also asked Corzine for confirmation, knowing that MF Global may be in distress.

“Thus, around early to mid-afternoon on Friday, Oct. 28, JPMorgan reached out to Mr. Corzine to explain JPMorgan’s understanding of how the London overdrafts had been covered by a series of transfers originating with a withdrawal of funds from a customer segregated account, and to ask that MF Global confirm in writing that the funds it had transferred represented its own funds,” Genova said, in a prepared statement. Corzine, it was stated, said that he would ask his staff to draft a letter stating that the funds transferred are in compliance.

“Nevertheless, our request did result in our receiving multiple clear oral assurances from senior MF Global officials that MF Global was in compliance with its obligations under the [Commodity Futures Trading Commission] CFTC rules,” Genova said.

Ferber said in her testimony that the letter drafted by JPM was overly broad and MF Global was hesitant to sign due to the nature of the wording in the letter.

The letter was “too broad because it sought certification for prospective transfers and for every transfer that had occurred on October 28th,” Ferber said in her testimony. Unless one employee had handled all cash transfers or was able to review all cash transfers, she could not issue such confirmation to JPM.

On Oct. 29, JPM sent a revised letter specifying the $175 million transfer, which Ferber was happy with and handed it to the firm’s legal department. That was the last of her involvement, she said.

The next business day, MF Global filed for bankruptcy.