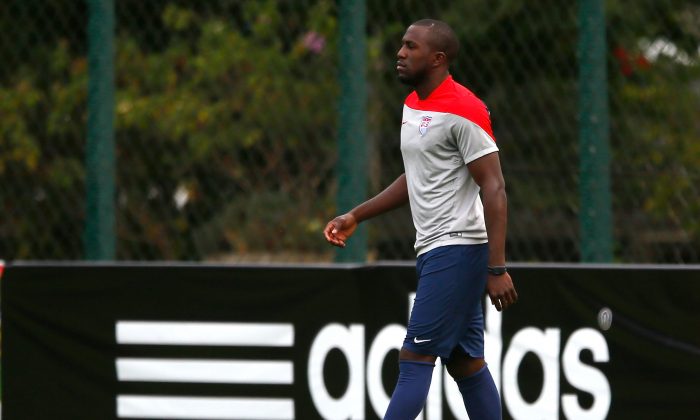 Jozy Altidore Injury Update: USMNT Striker Fit to Play, But May Not Start Against Belgium

Jozy Altidore is finally fit and available for USA at the World Cup.

The 24-year-old striker, who plays for English Premier League side Sunderland, strained his left hamstring in the United States’ opening match against Ghana on June 16.

Altidore missed USA’s following two group stage matches against Portugal and Germany, but has been working out on his own as part of his recovery.

US coach Jurgen Klinsmann said he has to determine “how much work is in his legs.”

“We don’t know how much because we need to see how he’s going, but he’s available,” Klinsmann said on Monday.

“How many minutes? We will see that during the game.”

This means that Altidore, who has 23 goals in 71 international appearances, might not make the starting line up.

USA has coped well in Altidore’s absence, shifting from a 4-4-2 formation to a narrow 4-2-3-1/4-1-4-1, with captain Clint Dempsey playing as the lone striker up front.

Still, having USA’s main striker back in action will be a boost to a team seeking quarter final qualification against the tournament dark horses Belgium.

“Just having him with us tomorrow is huge,” Klinsmann said.

SALVADOR, Brazil (AP) â They know the eyes of the United States will be on them from thousands of miles away, and they say they are ready.

The Americans try to reach the World Cup quarterfinals for the first time since 2002 when they play Belgium on Tuesday.

“For some of the guys, it’s the last opportunity, so we have to make the most of it,” U.S. captain Clint Dempsey said. “And I’m sure if we play to the best of our ability, we’ll get a positive result.”

There were two bits of news on the eve of the match. Jozy Altidore has recovered sufficiently from his left hamstring strain to be available, although it appears he is unlikely to start. The forward has not played since the Americans’ June 16 opener, when he was taken off on a stretcher during the first half.

“Just having him with us tomorrow is huge,” U.S. coach Jurgen Klinsmann said Monday, adding Altidore’s time on the field depends on “how much work is in his legs.”

Klinsmann created a stir by saying he isn’t happy with FIFA’s choice of referee, Algeria’s Djamel Haimoudi. His nation was eliminated by the U.S. in 2010, and Algeria played in the same first-round group as Belgium.

“Is it a good feeling? No,” Klinsmann said at a news conference.

A lot more people are following now. The U.S. averaged more than 18 million viewers on ESPN and Spanish-language Univision for its three first-round games, and viewing parties are scheduled for Tuesday ranging from Solider Field in Chicago to Veteran’s Park in Redondo Beach, California.

“The country is paying attention in a way that it’s never done before, and we have a chance to make some history,” U.S. Soccer Federation President Sunil Gulati said.

A victory against Belgium would put the U.S. in a Saturday quarterfinal against Argentina or Switzerland. With kickoff at 4 p.m. EDT, people are expected to leave work early, take extended lunch breaks and sneak looks at online streams from their mobile phones and office desktops.

“It means a lot to us, the energy that comes from the United States,” said Klinsmann, the former German star striker who moved to California in 1998. “You see where the game is going in the United States. You can’t stop it anymore. It’s breaking through.”

But the Red Devils are banged up. Central defender Vincent Kompany (strained left groin) is questionable and left back Thomas Vermaelen (right hamstring) is out. Midfielders Moussa Dembele and Marouane Fellaini â known for his mop of bushy dark hair â have been slowed by calf injuries.

Fellaini is a former Everton teammate of American goalkeeper Tim Howard, who played with Belgian forwards Romelu Lukaku and Kevin Mirallas last season. Howard is also familiar with Eden Hazard, who was criticized for his play during the first round despite setting up go-ahead goals against Russia and Algeria.

“Probably one of the best players in the Premier League,” Howard said. “He’s shifty. He’s crafty. He’s everything you want in a winner.”

Dempsey, 31, and 32-year-old defender DaMarcus Beasley are unlikely to be on the 2018 roster. Howard, 35, hasn’t committed to another four-year cycle.

“I’m not at all sure it’s his last World Cup,” Gulati said.

Belgium is quite familiar with Klinsmann: He scored in Germany’s 3-2 win over Belgium at Chicago’s Soldier Field in the second round of the 1994 World Cup.

Klinsmann and Wilmots are friends, too. They had scheduled a training session between the teams June 12, but Wilmots called it off because he didn’t want to get caught in Sao Paulo’s traffic jams.

Last year, Belgium overwhelmed the U.S. 4-2 in an exhibition at Cleveland. But friendlies are different.

The Americans know they have to boost their offense, which was next to last in attacks during the first round.

“It’s all about who wants it more,” Beasley said. “You can’t leave anything on the field for these type of games.”